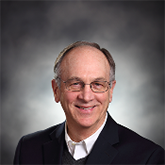 Dr. Thomas F. Alguire has a love of learning. That's why the 76-year-old internist from Grand Haven, MI, has been a fixture at ACP's annual Internal Medicine Meetings for years.

“I love going to meetings. I love learning. I love interacting with family members and friends that are in medicine and it's very stimulating. So for somebody my age to be able to keep working at a pace that's comfortable, it's really quite something.”

Dr. Alguire has deep roots with ACP and is a longtime member of the Michigan Chapter. “It was fun because when I went to a national meetings, my brother would be there. So we'd go out to dinner and I would meet heads of departments and deans and interesting folks from the academic world that I never would have met otherwise." His brother, Patrick C. Alguire, MD, FACP, is Senior Vice President Emeritus for Medical Education at ACP.

“I brought my kids to a meeting when they were medical students,” Dr. Alguire says. “The medical group I've been with over the last 15 years, they're pretty involved with ACP. So it was fun to go to a meeting with your partners, too. The meetings are inspiring, and that sort of lifts you and you to try to do better than you've done before. For me, the Internal Medicine Meeting always involved family and friends and learning. We always look forward to those meetings. I've learned so much from ACP over the years.”

Dr. Alguire is proud of ACP's advocacy work and the important issues the College speaks out on. “I really appreciate it when ACP takes a stand on health matters that are for the good of the country, things like health care for all and preventing gun violence. We need a voice saying these things. I think that if people don't have health care, as we're seeing now, it affects everybody. We're starting to learn how important health care for everyone is. And I think the ACP has always been a proponent of that.”

Originally from Flint, MI, Dr. Alguire thought about a career as an engineer in the auto industry. But he changed his mind after going through some medical issues when he was a high school swimmer.

“I was a good swimmer, but I got mononucleosis in high school. And then I tried to swim the next year and I got the symptoms all over again. I was impressed with the internist that took care of me,” he recalls. As a student at Michigan State, he ruptured a disc in his back and had to have surgery. “My internist managed things for me then too. I got into the medical field through the experiences I had with my own health. I thought, ‘Boy, these guys really helped people’ and I thought that would be something that I should do. So I switched into a pre-medical program when I was a junior in college.”

Being in a general internal medicine allowed me to shape what I wanted to do, easier than I could have done it in other fields.

He enjoys working with older patients and palliative care teams to discuss treatment options. “We find less is more in the older populations, and lessening the intensity of care in the elderly does not lead to worse outcomes. In the office, the elderly are often on several medications started by several different physicians and why they were started is not always clear. Elimination of medications not deemed essential often leads to patient improvement. Non-treatment of the elderly, or minimal treatment, has helped save many patients from poor quality of life while not shortening lives,” he says.

He definitely enjoys small-town life in Grand Haven. “In a small town you've got to expect people at the grocery store to come up and ask you medical questions and that sort of thing. And that never really bothered me that much because you can always defer it if it's too complicated. But on the other side, it can be a little painful when there's a tragedy because you know people in the community pretty well. But I really enjoy being in the small community here. Of course being around the lake is not hard to deal with. I love being in this small town.”

After he and his family moved to Grand Haven, his aunt and uncle moved to the lake for retirement. “Then my folks came and then my brother and another aunt. A large part of my family settled here after I moved here. My two daughters moved back here after traveling to different locations for education. Six of my grandchildren are within six blocks of me, and my son's family is only 40 miles inland in Grand Rapids. That has been wonderful and in today's world unusual to have immediate family that close,” he says, adding that all 10 grandchildren are great friends.

Being part of the community as a general internal medicine doctor has been very rewarding too.

Two of Dr. Alguire's three children are also physicians. His son, Craig, was a cardiologist before he passed away from glioblastoma last October and his daughter Katie is an oncologist. His other daughter, Amy, is a social worker. He says his wife of 53 years, Mary Kay, is greatly responsible for making sure the family got along. “She always encouraged cooperation and made sure that nobody was left out.”

With all that family around, you wouldn't think there'd be time for hobbies. “When your kids play sports, you take pictures. So I developed an interest in photography. Our kids were all swimmers and it's hard to sit at a swim meet without doing anything. So I became the team photographer. It was expensive back then because there was no digital and we had to use a lot of film. And since we had a small paper in town, they would sometimes use my pictures of swim meets and soccer games. The sports editor would ask me to cover some sports from time to time.” He says he has more than 42,000 photos on his home computer.

Dr. Alguire also had an apiary with his father for several years during the 1980s. “We each had two or three hives and each tried to get most honey. In those days your bees arrived in the mail. They came in a screen box with five pounds of bees and a queen. I got a lot of anxious calls to get my bees out of the post office.”

He's also been able to combine his love for family with medicine. He and his daughter have seen the same patients. “My son and I shared patients also when he was alive and practicing. He got a lot of requests from my patients who knew him as a student or athlete here. That was a joy for me.”

Dr. Alguire looks back fondly on more than 40 years in medicine and life in Grand Haven. “I've had as good a life as I could imagine over here. It's been wonderful. And being part of the community as a general internal medicine doctor has been very rewarding too. I look back on it and I'm glad I did what I did,” says Dr. Alguire.