Upon finishing my basic sciences, I was given the opportunity to start my third year of medical school with a rotation in internal medicine. Like many of my peers, I was thrilled, anxious, and excited all at once. I knew that this rotation would be demanding and would challenge me to evolve in the way I assess and think about new situations. By the end of our second year of medical school, we have been trained to critically analyze the “what,” “why,” and “how” of various medical conditions. Throughout my internal medicine rotation, I built upon this foundational knowledge to obtain a greater understanding of how to apply it in a clinical setting. This required me to think critically and add the questions “What else does this mean?” “What steps should we think about next?” and “How can we better help our patients?” to my approach. Above all, this rotation has helped me learn through experience things that I could have never hoped to have learned in a classroom or lecture setting.

Meet Mr. C, lying in his bed comfortably in the intermediate care unit. At first glance, he seemed like a grumpy elderly gentleman, easily in his 70s. He had few teeth left, and his face showed years of wear. His arms and legs looked frail and weak, with little muscle on his bones. As he sat in his bed, I noticed that he had a tracheostomy tube in place and wondered to myself why he had it. What happened to him? I tried to ask him how he was doing and find out what was going on, but his circumstances made it difficult to converse. He was only able to move his head up and down, mouth words, or use his hands to express himself. It didn't help that his willingness to communicate with the team was nonexistent; he was clearly upset that he still had the tube. Each time we checked on him through the span of passing days, he would motion to his tube with questioning hands. His eyes would widen and his brows would furrow as if to ask us, “Why is this still here?” and “Why am I still here?” Each time we would explain to him that he needed it so he could breathe and his organs could have enough oxygen to properly function.

While Mr. C was in our care, I wanted to gain a deeper appreciation for his full story, so I decided to read up on his case a little more. I opened his chart and was immediately surprised. This man was not elderly but a mere 53 years old. How could someone his age look so drastically the contrary? I started to dig deeper and found that Mr. C was suffering a multitude of maladies. He had a history of alcoholism, hepatocellular carcinoma, chronic kidney disease, and COPD just to name a few. But what was it that brought him in? Well, he seemed to be making monthly trips to say “hello” to the emergency department. This admission was no different. Mr. C was found unconscious after drinking heavily one night, although this visit was complicated by significant aspiration. Imaging and laboratory studies were performed and revealed grave findings of hepatocellular carcinoma metastases throughout his body, including his bones and lungs.

It was evident that his condition would not improve and that the tube would not be removed despite his daily reminders to the team. Since there was nothing more we could do as far as his treatment, the team thought it best to bring in palliative care to alleviate his condition. Although I was just a student, my team was kind enough to allow me to sit in on the meeting with the family regarding decisions to be made about Mr. C's plan of care. The physicians and I entered into a quiet room accompanied by Mr. C's separated wife and the palliative care team. I had never sat in on this type of meeting before and did not know what to expect. There have been times when I have questioned my resolve to be a physician, and this moment was one of them. How do you even begin to talk about end-of-life care with a patient's loved ones? How do you show your immense support for them, even though you have never met them before? Even though you have not walked in their shoes to know what they feel or what they would be thinking? All of these thoughts faded as the doctors exemplified every quality you would hope for in a physician of your own. We migrated our meeting into the patient's room to keep everyone in the same loop. Mr. C's wife had not seen him since their separation 8 months ago; upon seeing him today, he was unrecognizable to her. Eight months ago, he had weighed over 230 pounds; today, he weighed 143 pounds, an unfortunate detail of his history that no one had seen.

The whole time prior, Mr. C was convinced that, somehow, he could get the tracheostomy tube removed and walk out of the ICU like nothing was wrong. I believe that all of us appearing at his bedside along with his wife made him truly grasp the gravity of his condition. Before we even said anything, he pointed to a whiteboard we had been using to communicate. I brought it to him. With tears in his eyes, he wrote, “How long do I have?” The doctor responded, “Mr. C, it's really hard to tell an exact time, but we are trying to give you as much as we can.” I held Mr. C's hand as tears trickled down his face. The doctor gently brought up his options of going to a nursing home or to a hospice and explained the difference between them. Pensively, Mr. C wrote to us, “I would like to live happy.” I was awestruck by the incredible poise of the intern and resident despite the intensity of the situation and by the way they demonstrated genuine empathy as they comforted the patient and his wife.

This man who was once grumpy and refused our help had now softened, realizing that we truly were there as his advocate. As we neared the end of the meeting, he wrote on the board, “Come back and see me some time.” Through the remainder of his time in the unit, we visited him daily and gave him as much company as we could. He unfortunately died several weeks after being moved into hospice, but at least he had the comfort he had wished for and died peacefully.

This encounter demonstrated to me what a valuable learning experience I received in internal medicine, obtaining skills and insight that I will carry with me throughout my medical career. I walked away more acutely aware of the breadth of a doctor's responsibilities: long days, extensive paperwork, and daily confrontation with trials of human life that tug at the heart. This particular experience truly left an impact on me. At that moment I realized that, as doctors, we are treating not just patients but the whole family. The healing power of medicine is the ability to bond with and comfort another human being. Furthermore, this experience taught me that even doctors are sometimes helpless: against disease, insurance policies—and patients themselves. I feel fortunate that this rotation gave me the chance to experience firsthand the lives of the people in this community. There is something significant about providing health care. Even more extraordinary is offering health to those who would otherwise be helpless. 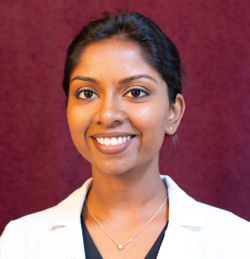