Given for major contributions to medical education. 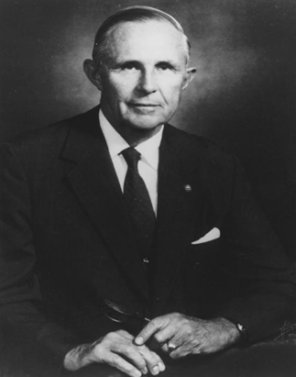 The following description of Dr. Woodward was written by Phil Mackowiak and published in Trans Am Clin Climatol Assoc. 2006; 117: lxviii-lxxi. PMCID: PMC1500927:

Dr. Woodward was born in Westminster, Maryland on March 22, 1914. As a youngster, he accompanied his physician father on house calls, igniting a spark that would become a life-long passion for medicine. He attended the Westminster High School and then Franklin and Marshall College where he lettered in five sports while earning a bachelor of science degree. He then entered the University of Maryland School of Medicine, graduating in 1938 with a medical degree and the hand in marriage of his classmate, Celeste C. Lauve.

While in medical school, Dr. Woodward spent two summers as a sub-intern at the Tuberculosis Sanatorium in Sabillasville, Maryland. After graduation, he completed a two year internship at the University of Maryland Hospital and then traveled to Detroit for a year as an Assistant Resident at the Henry Ford Hospital. He intended to return to his hometown as a general practitioner but had this plan altered radically and irrevocably by the outbreak of World War II.

From 1941 to 1946, Dr. Woodward served his country as a member of the U.S. Army Medical Corps. His first assignment was an investigation of dengue fever in Bermuda. Shortly thereafter, he went to Jamaica to pursue indigenous rickettsioses, and then traveled to North Africa, where he worked closely with Pasteur Institute scientists on epidemics of typhus in Morocco, Algeria and Tunisia. Lessons learned during these assignments served him well in the decades that followed, first as a member of the Typhus Commission in Italy, Aden, England, France and the Pacific theater and then as a long-time member of both the U.S. Armed Forces Epidemiological Board, over which he presided as president from 1976-8 and 1980-1992 and the U.S. Advisory Committee of the U.S.-Japan Cooperative Science Program. His research, first in the Army and then for another four decades at the University of Maryland, laid the foundation for modern concepts of the epidemiology, immunology and treatment of typhus, Rocky Mountain spotted fever, typhoid fever, brucellosis, tularemia, cholera and bacterial meningitis. For his singular contributions in this regard, he received the U.S. Typhus Commission Medal (from President Roosevelt in 1945), the Louis Pasteur Medal (1961), the U.S. Army's Outstanding Civilian Service Award (1973), the Sir Spenser Lister Award and Medal of the South African Institute for Medical Research (1982), a Special Citation and Award from the Japanese Ministry of Health (1985), a Commendation from the U.S. Department of Defense for Exceptionally Distinguished Service (presented by Secretary Cheney in 1989), the Order of the Sacred Treasure, Gold and Silver Star of Japan (1990), a Flag of the United States of America flown over the U.S. Capital Building (1992), the Department of Defense Medal for Distinguished Service with Two Oak Leaf Clusters and the Order of Military Medical Merit, U.S. Army Medical Department (1992).

Dr. Woodward returned to the University of Maryland after World War II and in 1948, established one of the world's first Divisions of Infectious Diseases, which he nurtured into one of the largest and most productive such divisions anywhere. He was instrumental in the creation of the SEATO Cholera Research Laboratory (forerunner of the International Center for Diarrheal Research) in Bangladesh and a N.I.H.-funded International Center for Medical Research and Training in Lahore, Pakistan. He was a charter member of the Infectious Diseases Society of America, which he helped found and served as president in 1976. In 1991, he gave the society's Edward H. Kass Lecture and received its Bristol Award. In 1954, Dr. Woodward replaced his academic mentor, Dr. Maurice C. Pincoffs as Chairman of the Department of Medicine at the University of Maryland, and in his long and highly productive tenure in that position made, in many respects, his most important and far-reaching contributions to the medical profession. During 27 years as chairman, he was for many of the more than 10,000 students and thousands more residents whose lives he touched the "compleat" physician they aspired to be. In recognition of his contributions as mentor and role model, the American College of Physicians honored him with its Distinguished Teacher Award in 1992, the AMA its Distinguished Service Award in 1995 and the Houston Academy of Medicine its John P. McGovern Compleat Physician Award in 1997.

As chairman, Dr. Woodward's philosophy, which some today would regard as outmoded, was "to do what seemed best for his school, not simply for his department." He placed great emphasis on clinical care and instruction, insisting that every member of his faculty teach Physical Diagnosis, as he did, believing it to be one of a medical school's most important courses. Students fought to be assigned to his group as they did to his service when he attended on the ward. Throughout his busy career and his equally busy retirement he also practiced his art continually as personal physician to a host of grateful patients.

Dr. Woodward stepped down as chairman of Medicine in 1981 but never actually retired. Until late into his 80s, when failing health finally confined him to his home, he traveled to his office daily to see patients, to teach physical diagnosis, to lead a weekly conference for junior medical students and to serve as a ward attending two months each year. He accomplished a great deal in his career for which physicians and patients around the world have much to be grateful. However, he will long be remembered for his character and the type of man he was, more than what he accomplished as a medical investigator, teacher or administrator. The depth of devotion and gratitude he generated among those whose lives he touched with his uncommon generosity would be difficult to gauge. One measure might take into account the many awards he received from grateful organizations, another, the welter of lectures, rooms and such named in his honor. At his alma mater, there is the Annual AOA Theodore E. Woodward Lecture, the Theodore E. Woodward Chair in Medicine, the Theodore E. Woodward Award for Excellence in Internal Medicine, the Theodore E. Woodward Medicine Conference Room and the Theodore E. Woodward Historical Suite in the Health Sciences and Human Services Library. The Baltimore VA Medical Center has its Theodore E. Woodward Library, Baltimore's Gilman School its Woodward Health Center and the Maryland Medical & Chirurgical Faculty its Theodore E. Woodward Annual Lecture in the History of Medicine. There is also a Theodore E. Woodward lecture series hosted by the Navy Environmental Health Center since 1992. And there are the honorary D.Sc. degrees conferred on him by the University of Maryland, Western Maryland College (McDaniel College), Franklin and Marshall College and Hahnemann University.

In one of many addresses to graduating students at the University of Maryland, Dr. Woodward said: "My rich blessings are Celeste and a dear family, the confidence of friends and the privilege of having been in a position to try and help someone." By any measure, he was, indeed, blessed with a remarkable and loving family. His wife, Celeste, an accomplished physician in her own right, for whom an endowed chair in our department has been named, was a full partner in each of his many successes. His three surviving children, Bill, Craig and Celeste are, likewise, each prominent physicians who were for him a source of great pride. Dr. Woodward held many important positions which he used relentlessly to help others and in addition to his family, he was blessed with an enormous intellect and an extraordinarily productive career. Nevertheless, he will be remembered most not for what he had, but for what he gave.