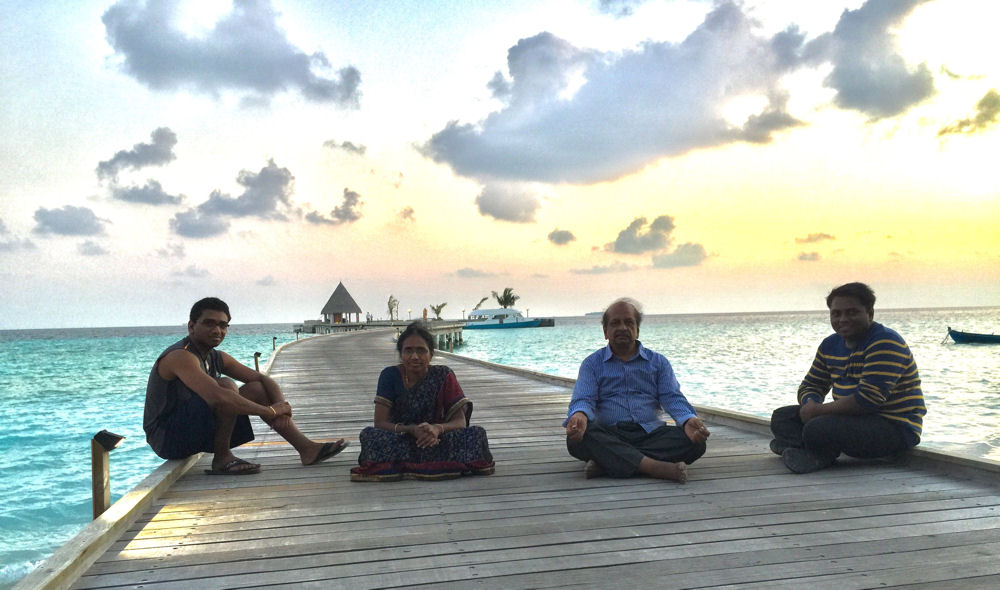 So it shouldn't come as a surprise that he made up his mind to become a physician when he was a child. But his parents get some of the credit for his decision. “It's in part from them, the work they do, the hours they put in, how much they do for the community. And they have been doing that for 37 years without a break.”

Dr. Malayala is Chair of Medicine at Bayhealth Hospital, Sussex Campus in Milford, DE, which is about 100 miles from both Philadelphia and Washington, DC. “It's a pretty rural hospital. It is quite different than a university setting where I was trained. I feel that the most important physician here is the internist in the outpatient setting and the hospitalist in the inpatient setting.”

He recalls a time when a patient in his hospital became seriously ill. “I used all the resources I could get and did the entire work-up, I did the best I could, and I could come down to a reasonable diagnosis.” The patient ended up being transferred to the University of Pennsylvania for further diagnosis and treatment. “So that was challenging because I wasn't sure if I was making the right move, but eventually it turned out that the diagnosis was right. That's where it gets rewarding being an internist. But still, maybe you can help somebody out.”

Dr. Malayala came to the United States in 2009 because of the research opportunities (“one of my passions”) and the diversity of practice. He attended Western Kentucky University in Bowling Green to acquire his Masters in Public Health before moving to Buffalo, NY, for his residency. “I did two semesters in Kentucky before my residency and I liked it so much, I didn't want to give up. Even though I matched in residency, I took one public health subject a semester. I used to travel back and forth from Buffalo to Kentucky. And after I was done with my residency, I still made sure that I finished public health.”

He had heard about winters in Buffalo, but nothing prepared him for the real thing. “Buffalo was definitely a shock. I came up for the interview on December 9–I'll never forget that date. We thought it would be a nice evening and we were going to go to Niagara Falls. But it turned into a treat when a storm came and we got three feet of snow. All we could do was stay in the hotel for two days and go back to Kentucky two days later.”

He got involved with ACP in his first year of residency. “I used to go to our chapter meetings and submitted an abstract every year to the ACP. I had a chance to present to the national ACP in my second year. My program director was a big fan of the Doctor's Dilemma program. I represented my team in my second and third years. And after that, I ran the Doctor's Dilemma program in my residency program. Every quarter we had four teams and they competed with each other.”

Dr. Malayala appreciates what ACP does for members, especially ACP's advocacy and public policy efforts. “I'm active with a lot of advocacy work. When you're in clinical practice, you don't have enough time. ACP steps up to guide us help solve problems we go through. ACP has given me a lot of educational opportunities all through my training. It has given me the opportunity to grow as a leader, as a mentor, and as a teacher.”

The cities and metro areas are saturated and the small towns sometimes go through a crisis with a physician shortage.

Having first-hand knowledge of the challenges of rural medicine, he and two colleagues created a nonprofit organization, Physicians for American Health Care Access. Dr. Malayala said the group is focused on legislative changes to increase access to physicians in rural parts of the country. They traveled to Washington, D.C., to support Senate Bill 948 and house bill 2895, the Physician Access Reauthorization Act. He says the bill reauthorizes the existing J-1 visa waiver program to attract more physicians to practice in rural and underserved areas. The ACP has written an open letter supporting the legislation. The bill has been referred to the Senate and House Judiciary Committees.

He says his own practice is a prime example of why the group, which now has 500 members, is needed. “Physicians need a really big incentive to come to a small town because they think it's a challenge to practice in places they are not used to practice while in residency and fellowship. The cities and metro areas are saturated and the small towns sometimes go through a crisis with a physician shortage. And it just gets worse when I talk to colleagues in the Midwest or in the South, about how they're the only nephrologist or the psychiatrist for 50 miles around and how people drive from state to state to get dialysis or when they are going through a substance abuse problem.”

The bottom line is we need more physicians coming down to medically underserved areas.

Dr. Malayala does what he can to make up for the shortage. “On my week off or my days off, there are a lot of physicians like myself who can volunteer to work at a VA or at a drug rehab program. The bottom line is we need more physicians coming down to medically underserved areas.”

He chose internal medicine as his specialty for the diversity. “I didn't want to get stuck in one area or in one specialty. I wanted to continue with this kind of medicine. Right now I'm a hospitalist, but at some point in my career, I would love to do traditional medicine so that I can treat everything that comes my way. And the most important specialty for any patient is the internist.”

When Dr. Malayala thinks back to his time in high school, he remembers comparing himself to classmates who wanted to go toward IT and other professions. “I used to think, ‘why am I doing this and I shouldn't have to go through medical school and all those years of training. Do I deserve this?’” In retrospect, he knows he chose the right path. His advice to medical students is to have persistence and patience and “don't look for fast results. Once you get there, it will be the most rewarding thing. When you're done with everything, medicine will be the best thing that anyone can do for themselves.”

Dr. Mayalaya lists travel, public speaking, home making and cooking as his passions away from the hospital. His favorite destinations include the beaches in Maldives and the historic Capadoccia region in Turkey. He likes to experiment in the kitchen and enjoys having friends over to sample his creations and he prefers to cook Indian fusion dishes.