Physicians Call for Better Access to Health Care for Immigrants 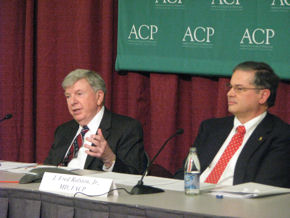 SAN DIEGO, April 7, 2011 -- As the U.S. immigrant population grows it will be necessary to address the vast number of immigrants who do not have access to health insurance coverage, or who face other barriers to accessing health care, the American College of Physicians (ACP) said in a new policy paper released today at Internal Medicine 2011, ACP's annual scientific meeting. National Immigration Policy and Access to Health Care

"Currently immigrants, both documented and undocumented, face many barriers to adequately accessing badly needed health care," said J. Fred Ralston, Jr., MD, FACP, president of ACP. "They are more likely to lack health insurance than U.S. citizens; they may lack the funds necessary to pay for health care services without insurance; and, they may face the additional barrier of being fearful that seeking medical attention may lead them to be reported to authorities."

In order to address these concerns, ACP is calling for the development of an immigration policy on health care that includes: 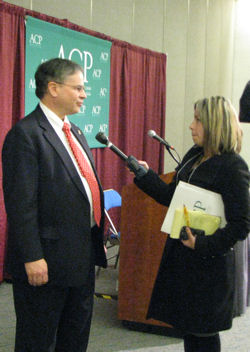 "Access to care for immigrants is a public health issue that should be of concern to all of us," continued Dr. Ralston. "Take the case of immigrants with tuberculosis; under the current system they may be afraid that going to a hospital to seek treatment would place them at risk for deportation. If they decide to delay care because of this fear, it could increase the number of people exposed to the disease exponentially. Imagine if those same immigrants were not only unafraid to visit the hospital, but they were receiving regular primary care services. They may be treated before experiencing any symptoms and decrease the public exposure that much more."

The new policy will need to be complex to adequately reflect the complexity of the issue. It will need to take into consideration:

"Any national immigration policy will need to balance the legitimate needs and concerns to control our borders and to equitably differentiate in publicly-supported services for those who fully comply with immigration laws and those who do not," concluded Dr. Ralston. "However, access to health care for immigrants is crucial to the overall population of the U.S. We all have a vested interest in ensuring that all residents have access to necessary care."

About the American College of Physicians

The American College of Physicians is the largest medical specialty organization and the second-largest physician group in the United States. ACP members include 130,000 internal medicine physicians (internists), related subspecialists, and medical students. Internists specialize in the prevention, detection, and treatment of illness in adults. Follow ACP on Twitter and Facebook.