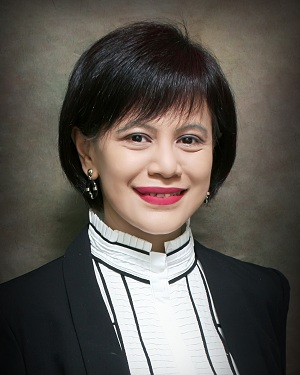 Indonesia, officially the Republic of Indonesia, is a sovereign transcontinental country located mainly in Southeast Asia with some territories in Oceania.      Situated between Indian and Pacific oceans, it is the world’s largest island country, with more than thirteen thousand islands. It has an estimated population of  over 260 million people and is the world’s fourth most populous country.*

I was inspired by my parents, who were both physicians. In addition to taking care of patients in the hospital, my father was a teacher in a faculty of medicine in  my hometown. I enjoy teaching as well therefore, I was motivated to carry on his dedication to the progress of medicine in my country, by being both a clinician  and an educator.

What do you enjoy about being an internist?

An internist has to have the ability to see a patient comprehensively and not focus on a single organ or a particular system. That principle goes along with my own philosophy of a human being. I truly enjoy being an internist, being absorbed in the process of diagnosis and treatment of a human being as a whole.

What is the role of the internist in Indonesia?

Internists have very important roles in Indonesia. In our national healthcare system, internal medicine is among the four largest specialties (along with surgery, obstetrics & gynecology, and pediatrics). These are the most needed based on the prevalent diseases and health problems in Indonesia. Nearly all of the top 10 encountered diseases in Indonesia are internal medicine problems. Therefore, internists have a tremendous role in attaining our goal to be a healthy nation.

What are some of the most significant challenges that physicians throughout the Indonesia face?

There are many challenges that an internist has to face in Indonesia, both internally and externally.

One external challenge we are facing is the uneven distribution of internists throughout Indonesia. It is still difficult to attain internists as Indonesia is geographically the largest archipelagic nation in the world by area and population. This combined with very diverse cultural backgrounds that sometimes put barriers to the acceptance of modern medicine. Another external challenge we are currently confronting is the national health care and insurance system that was just started in 2014. This system is is relatively new and is still continuously being improved.

What are your thoughts on the best way to meet those challenges?

For the internal challenges, I always strive to educate and be a role model for my students. I teach them that as internists, they perpetually need to apply a comprehensive way of thinking in their practice, and keep abreast of their medical knowledge. For the external challenges, I hope every stakeholder can work together to achieve the best solution. In my opinion, professional organizations have a very important role in fulfilling our nation’s right to equal health care.

What can other countries learn from your health care system?

Our national health care system is stratified, from level 1 (primary care) to level 3 (tertiary care). Internists and a subspecialists have important roles mostly in level 2 and 3. We are implementing a referral system which will be divided based on regions of  Indonesia.

Are enough young physicians in Indonesia choosing to be internists?

Becoming an internist is still one of the most aspired career paths for both young and experienced physicians. Internal medicine remains among the top 5 specialty programs in Indonesia.

What makes them choose (or not choose) to practice internal medicine?

What advice would you give to someone who is thinking about going into internal medicine?

I always advise my students to incessantly improve and keep abreast of their internal medicine knowledge and skills. This is especially important for the most prevalent cases, which are already prioritized by The Indonesian Society of Internal Medicine.

Can you describe the role of the Indonesia Society of Internal Medicine?

The Indonesian Society of Internal Medicine (PAPDI) has a very important role in overcoming the obstacles to our nation’s health because the top 10 most prevalent diseases in Indonesia are mostly internal medicine problems. PAPDI is the largest medical association, and has the most members among other professional medical organizations in Indonesia as well. With its parent organizations (the Indonesian Medical Association, Ikatan Dokter Indonesia, IDI), PAPDI works together to help the government manage the national health problems.

What are the missions and goals of the organization?

The PAPDI’s vision is to be a professional and internationally acclaimed organization. Our goal is Indonesia’s physical and mental health. With that vision in mind, we always implement our values: professional, trustworthy, compassionate, having dedication, and integrity.

Indonesia recently hosted the World Congress of Internal Medicine (WCIM) in Bali. Could you describe the planning process behind this meeting?

In accordance to our vision of becoming an internationally acclaimed professional organization, we strived to win the bid in 2010 to host the 2016 WCIM. PAPDI had actively contributed during previous meetings and in International Society of Internal Medicine (ISIM) member’s discussions. The former PAPDI president Prof Aru Sudoyo became an Executive Committee member of ISIM, and he is currently the President of ISIM. Appointed as the host of WCIM 2016, the national PAPDI board collaborated internally with the PAPDI branch in Bali (PAPDI has 36 branches distributed throughout Indonesia). During the event, all PAPDI branches of Bali members are involved in hosting the event.

Please provide a brief recap of the WCIM activities:

The activities held at WCIM 2016 included an opening ceremony by the health minister of Indonesia, a variety of scientific sessions (such as workshops, symposiums, poster presentations, oral presentations), a presidential dinner for the faculty members, young investigator award announcement, several ISIM organizational meetings, and closing ceremony.

Why is it important for physicians in Indonesia to belong to professional organizations like ACP?

By becoming a member, moreover a fellow of an international professional organization such as ACP, Indonesian internists will feel honored and have the opportunity to be acclaimed internationally, and acquire knowledge from educational programs that ACP offers.

In 2011 I attended my first ACP Internal Medicine Meeting in San Diego, where I represented the PAPDI president as a special representative in the Convocation ceremony. Since then, I have always attended the ACP Internal Medicine Meeting and have partcipated in the international forum as an Indonesian representative. In 2014, I attended the convocation ceremony where I was inducted as an ACP fellow. Last month, Indonesia hosted the ACP Southeast Asian Chapter meeting in Jakarta.

Back to the November International Newsletter