Reflections on the ACP Abstract Competition 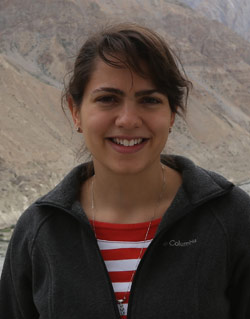 Q: You studied microbiology as an undergrad?
A: Yes, I did—I was originally planning to do biomedical research like cancer-cell biology research when I was an undergrad, and then I had the opportunity to shadow a couple of different doctors during a summer research experience at the University of Nebraska, so most of our time was spent doing research in the lab. But I shadowed a couple doctors that summer, and I thought, “Wow, this being a doctor thing is actually really cool.” After four to six months of thinking about it, I decided I wanted to be a physician instead of a basic science researcher, so then began pursuing medicine as a career instead of a PhD in science.

Q: And you liked the patient-care aspect?
A: Yes. The patient care and the interaction—I thought the lab was kind of isolating in the sense that you’re working with your colleagues, but you’re often working independently because you have your own project—as a physician, you’re really working as a team specifically for the patient to help them feel better. So that was really important to me.

Q: How’d you get involved with ACP?
A: I was rotating in my medicine clerkship in my third year of medical school, and our clerkship director sent out an email to the students saying that the ACP clinical vignette competition is coming up, and it was mostly for residents but they were really encouraging students to do a presentation also. We had a cool case on my internal medicine team that I was with, and so I presented that case at the University of Iowa ACP chapter competition. That was exciting, and then I found out from the residency program director that if you submitted a case to the national competition, the Iowa ACP chapter would pay for your way to go the national meetings. I thought that was pretty cool, and I’m always up for more learning and travel, so I submitted a different case for the national meeting during my fourth year and that actually got accepted. So then I went to the national meeting in my fourth year, which was in Orlando. I really enjoyed the meeting and it was fun to present my case.

Q: What was the subject of your case?
A: My case was about using ultrasound to connect with patients in the intensive care unit—the emphasis was that we spend a lot of time in front of the computer, but using bedside ultrasound can help us bring back to the bedside, focus more on physical exams and spend more time with our patients instead of our computers.

Q: When did you find out that you had won, and what was your reaction?
A: I found out that I had won at the conclusion of the meeting. I think on Saturday afternoon or early evening in Florida, they had a little reception where they announced the award-winners, and I was surprised and excited because I thought I had a good case but didn’t expect it to win. So I was actually at that reception with a bunch of other students and residents, and that was pretty exciting. And I was thankful for the opportunity that the Iowa ACP had sponsored my trip down there, too.

Q: Can you tell me the impact that it’s had on your medical career?
A: I try to keep my eye out for interesting cases, but instead of just finding interesting medical cases, trying to find a better story behind it and why it’s important as opposed to just interesting physiology or unusual presentation. Also, it’s given me confidence in writing up more cases or doing more scientific writing because I’ve had the opportunity to practice several times. It’s good that my residency program and places that I’m applying to see that I’m involved, interested and engaged, and so that’s always a benefit also, although that’s not why I do the completion—I do it because I really like preparing the case.

Q: Would you enter the competition again in the future if you had the chance?
A: Yes, I have a case in mind that I’m planning to submit for this year.

Q: Are you able to reveal what the subject of the next one is?
A: I can, it’s actually another ICU case—it’s about sub-acute right heart failure.

Q: How long have you been an ACP member?
A: Since I started residency in 2014—our program pays for our membership.

Q: Are you also a physician educator?
A: I educate medical students when they rotate with us, I don’t know if that’s officially part of my job description—they’re not with us on every rotation, but on a lot of rotations they are.

Q: Do you think that in the future you could see yourself being a professor or educator?
A: Absolutely, I plan to definitely stay in academics.

Back to November 2016 Issue of IMpact