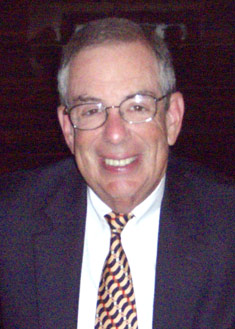 As a young physician in the 1970s, Dr. Phil Altus was an early advocate for issues surrounding hypertension and cardiovascular risk factors. Now that he’s retired, he’s keeping his blood pressure low and catching up on the hobbies he’s had since he was a child.

Growing up in New York State, Dr. Altus was very interested in sports and American history and eventually developed an interest in medicine through his academic studies as a teenager.

“Besides history, I was interested in science—I was interested in trying to deal with the usual things, dealing with people. I thought of what I really wanted to do in my life as a career, and I decided that looking at the pluses and minuses of everything, I would try medicine and see what that was like,” Dr. Altus said.

Despite having no relatives in the field of medicine, he cites his parents as a major influence in shaping his decision to become a doctor. When he began pursuing his medical degree at State University of New York (SUNY) Upstate Medical University in Syracuse, New York, Dr. Altus was so stimulated by the mentorship he received from teachers as a medical student that he eventually decided to stay at SUNY for his residency.

“I always think that my parents were extremely influential in my life and my development—neither of them were physicians, but just their role-modeling about doing the right thing and encouraging me. In the field of medicine, I loved my education, and the mentors that I had in medical school were just outstanding—there were probably ten or fifteen of them that I thought were just terrific people and terrific role models.”

These mentors instilled a value for the human aspects of practicing, which eventually drew Dr. Altus to internal medicine over any other specialty.

“I always liked the interpersonal relationship—the physician-to-patient type of a thing, and looking at all the specialties, I thought that internal medicine was the best. I always was interested in looking to the future, and trying to solve problems—I love the interaction with the patients rather than just cutting out a gallbladder or looking at an x-ray.”

When Dr. Altus relocated to South Florida later in his career, he was encouraged by his mentor and then ACP Governor for the Florida-Georgia region, Roy Behnke, to become active in his local ACP chapter.

“Roy created the Governor's Council and being a huge advocate of the educational mission, put the program directors from the medical schools, of which I was one, on the council. When I was elected, former governors told me how great it was going to be and it actually exceeded those expectations,” he said.

“I think the College has remained as the voice of reason in medicine in general, and in internal medicine specifically. It has always taken ‘the high road’ as far as being an advocate for patient care and a resource to help its members stay well educated, so that they are able to provide first rate care.”

“We took care of everybody”:

Dr. Altus was in the process of completing his residency at SUNY as the Vietnam War began winding down in the mid-1970s. At that time, the military offered an option for medical students known as the “Berry Plan,” which allowed drafted physicians to defer active duty until their specialty training was completed and then enter active duty for two years. Under what Dr. Altus calls the “Mini-Berry Plan,” he was able to fulfill his commitment after the second year of his internal medicine residency, serving as the officer in charge of an Air Force clinic in Denver, Colorado, from 1973 to 1975.

Serving in the Air Force gave the young physician leadership responsibilities and accountability, and the clinic’s limited supplies meant that Dr. Altus and his small staff had to be resourceful in order to provide the best possible care for their patients.

“The military is an interesting area medically, because it’s what I used to call a ‘closed-loop system.’ No one has ever lost a follow-up, because if you mess up, you hear about it when they come back to the same military base. I also learned how to practice cost-effective medicine even though people weren’t paying anything. We had a limited amount of resources at our clinic, and I learned how to take care of people without ordering a million tests. We had to try to do things with history and physical examination.”

After completing his military service, Dr. Altus relocated and began his work as a physician-educator at the University of South Florida. He eventually came to specialize in hypertension, a condition that had affected his father when he was growing up.

“If you go back to the ‘40s, ‘50s and ‘60s, people really didn’t appreciate the significance of mildly elevated blood pressures, and frankly there wasn’t much to do—there weren’t very good medications at that time. My father had elevated readings, but his doctor at that time said, ‘Well, they’re not too bad.’ In today’s day and age, he’d be treated immediately, but he went on to suffer some complications,” he said.

Despite the condition’s impact on his personal life, it wasn’t the only reason he came to choose it as his specialty—at the time, the public was much less aware of the dangers of hypertension, and Dr. Altus viewed prevention of it as an opportunity to improve patients’ lives.

“I looked upon that as something where you could really alter people’s lives by treating their blood pressure, and there’s a bunch of things you can decrease the risk of the patient developing by treating blood pressure. Two things that get you the best results are reducing heart failure and stroke, which are both really disabling conditions that greatly affect the quality of life.”

Seeing hypertension as a good area for a general internist to pursue, he eventually became a charter member of the American Society of Hypertension upon its founding in 1985.

“John Larrah, who was the head of the American Society of Hypertension in the beginning and a former Master of the ACP, said at one of the early meetings that blood pressure is just a symptom of something going on in the vasculature, just like fever is a sign of infection or underlying inflammation—you try to treat it by treating the underlying cause. That got me really interested in the pathophysiology of what was going on in the hypertensive patients and different ways to treat different people.”

Dr. Altus believes that efforts to increase the public’s awareness of vascular issues have led to improvements in the way that modern medicine treats hypertension.

“I did a lot of teaching in hypertension, a lot of lecturing in CME meetings and areas like that to try and educate practicing physicians so that they gave better care to their patients. We’re actually seeing the results over the last 30 or 40 years of dramatic decreases in a lot of these endpoints by treating people’s blood pressures.”

Dr. Altus retired in 2004, and now enjoys traveling and playing in bridge tournaments with his wife, Muriel. At home, he spends his time reading, cooking, following sports and tending his garden. He also remains actively engaged in medicine and regularly volunteers his time at the University of South Florida.

“I still love medicine, I still read medicine, I still read the Annals of Internal Medicine, and I read stuff that comes online. I go to the hospital once a week and run a conference that I used to run every day as program director, a morning report or a case-based conference where the residents will present a case to me and I’ll discuss it. So even though I’ve been retired, I do that because I still love the intellectual part of medicine.”

After seeing patients in both an inpatient and outpatient setting, Dr. Altus believes that modern trends in specializing can often result in disjointed or siloed patient care.

“Something I see that concerns me is that people get sent to a specialist, and that specialist is very telescopic as to what they deal with—everything within their field and just nothing else. And it’s sort of like the blind man and the elephant; there are four consultants on the case, and everyone’s doing their own thing and no one is taking care of the patient, the whole patient. We have so much we can offer patients today that we never could in the past, and yet I don’t think we’re maximizing our ability to provide the best care because of all of this fragmented care that they get,” he said.

However, general internists have a unique ability to counter this, and his advice for students is to not only provide the best care possible, but also to serve as an advocate for the patient’s interests and needs.

“Get to know your patients, and work with them as a team. Get to the point where your patients really look for guidance from you, especially in the field of general internal medicine. I think the role of a really good generalist is like being the quarterback of the team—he or she needs to not just pass off these people to consultants, but needs to be the advocate for the patient and to basically orchestrate what’s going on diagnostically and treatment-wise. They really should be the captain of the ship, and you develop really great bonds with the patient by doing that.”

Ultimately, Dr. Altus cites the influence that he’s had on successive generations of physicians as his proudest accomplishment.

“When I see these people, they come up to me, thank me, tell me what they’re doing and they tell me how much they enjoyed their training—that to me is the crowning achievement. I’ve done other things, I’ve moved up through the ranks—when I retired I was a professor, associate chairman, program director, and the director of the division of general medicine here at the University of South Florida. I was the ACP governor for Florida,” he said.

“When I retired, I started thinking that there’s probably been six or seven-hundred residents out there who I had some impact on their training, and thousands upon thousands of medical students—hopefully if I helped them to become better doctors, then that to me is my best achievement.”

Back to November 2016 Issue of IMpact