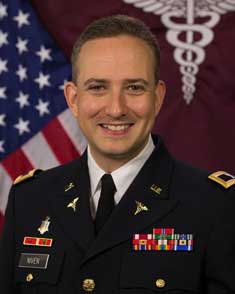 Colonel Andrew Niven, MC, had his first brush with doctoring when he inadvertently corrected his mother’s dislocated finger as a young boy. Now, he’s Director and Chief of the Medical Education and Research Division at the Madigan Army Medical Center in Tacoma, Washington, but his motivations for providing care are still rooted in the simple act of healing that drew him to medicine nearly 40 years ago.

Growing up in Missouri, Dr. Niven spent much of his childhood playing soccer and baseball or fishing for largemouth bass in the local creek. His parents were both teachers, but an unforgettable incident at the age of seven led him to eventually pursue a career in medicine.

“I went through all the traditional occupations that young boys from my generation used to go through—the cowboy, the firefighter, the policeman sort of phase,” he said.

“My mom got her finger caught in a handle of a drawer and probably barely dislocated her DIP joint, and then—I don’t know why she let me do it—but she let me look at it as a seven year old, and I accidentally popped it back into place. It was sort of the feeling of reward from that that got me talking about wanting to be a doctor, and that one just kind of stuck.”

With his career goals established, Dr. Niven focused on his education and eventually attended Georgetown University and Tufts University School of Medicine, supported by Army ROTC and Health Professions Scholarships. When the time came to choose a specialty, he explored several options but was ultimately drawn to the holistic aspects of internal medicine.

“I really enjoyed taking care of the whole patient—being able to care for the patient as an individual and understand the physiology of all the different medical conditions that can occur in an adult, and being able to manage those complex and inter-related medical conditions in a way that translates into a meaningful impact in somebody’s life over time,” he said.

As he progressed further into internal medicine, he found himself drawn to the specialty of pulmonary/critical care.

“There was a bit of a proceduralist in me—I enjoyed the opportunity to really feel comfortable managing whatever came in the door regardless of how sick, which is what drew me to pulmonary/critical care…that specialty also provided me with an opportunity to do a fairly wide range of procedures and make acute interventions that provided immediate and visible results.”

Dr. Niven completed his residency and fellowship at Walter Reed Army Medical Center and has now served as an active duty Army physician for almost 21 years. During that period of time, he’s continued practicing pulmonary/critical care medicine in addition to serving as an ICU Director, Director of Respiratory Care Services and an Assistant Pulmonary/Critical Care Service Chief. Now, he describes himself primarily as a medical educator.

“I’ve been on a clinician educator track for most of my career…when I came to my current duty station in Tacoma, Washington, Madigan Army Medical Center in 2004, I was offered the opportunity to serve as the associate program director for the internal medicine residency, primarily doing simulation based education and running the residencies research program until I assumed the role of program director for the medicine residency in 2008,” he said.

After six years as an internal medicine program director, Dr. Niven was selected to serve in his current role as the Director of Medical Education and Research at Madigan in 2014. The position also included the responsibility of being the institution’s “Designated Institutional Official,” a term used for the person who is responsible for all graduate medical education in the facility.

“A major part of my clinical activities every day is working with residents—teaching them my trade, the value of internal medicine, the things that are important within my specialty and subspecialty and hopefully sharing with them the same knowledge, skills and love for my profession that I’ve developed over the years.”

A clinician educator is always looking for ways to innovate and advance clinical excellence in the practice of medicine, he said, and one of the ways Dr. Niven has done this is through developing and integrating simulation-based education into training programs both within his institution and beyond.

“I was fortunate enough to build on the foundation of simulation training and curriculum that I developed (at Madigan), and to work at a national level with that through the American College of Chest Physicians (ACCP) by developing an airway management course—both fundamentals and difficult airway management for the critical care provider, and then later trying to generalize the framework and structure of our course through my leadership role as the chair of our simulation work group in the ACCP and now as vice-chair of the education committee.”

One of the advantages of simulation teaching is that it allows adult-learners to focus on the communication, teamwork, role assignments and resource management aspects that are essential to ensure high quality, team-based patient care. As an ACP member for over 20 years, high quality patient care has been at the center of Dr. Niven’s work in both research and practice.

“ACP provided a wonderful venue very early in my training to engage in both collaborative discussions and research opportunities. The people I interacted with on the Board of Governors and the Board of Regents when I was chair of ACP’s Council of Associates were just a really incredible group of individuals,” he said.

“That was an incredibly valuable learning experience for me—I felt very fortunate to learn from that thoughtful group who always put the care of their patients first with every decision they made; that really made me an ACP member for life.”

As part of his military service, Dr. Niven was deployed to northern Iraq in 2006 and western Afghanistan in 2011.

“I can say with confidence that my two deployments were probably the most rewarding experiences that I’ve had in my professional career, and both of them were rewarding for very different reasons. I was in Iraq in 2006 in an area where there was still a fair amount of insurgent activity. I was serving in a combat support hospital, which is basically the first place on the battlefield where you can provide definitive care with a fairly extensive range of diagnostic and treatment services available,” he said.

With the ICU, emergency department, operating room and blood bank all ten feet away from each other, the practice environment in Iraq was drastically different than any hospital he’d ever experienced in the United States. As the only practicing internist and intensivist in the hospital, Dr. Niven treated a wide spectrum of medical problems as both a primary caregiver and a consultant.

“I think that we were better suited in some ways to manage trauma patients in that combat support hospital than many major centers in the United States because that was what our facility was built to support. The proximity and teamwork that we had during that time was just incredible, and some of the clinical outcomes that we had there were simply amazing,” he said.

Five years later, he was deployed to a coalition military hospital in Afghanistan. American physicians worked side by side with Italian, Spanish and Bulgarian doctors to treat local Afghans and soldiers from many different countries, and Coalition physicians often exchanged professional advice with a local Afghan hospital.

“It was a very unique experience because of the blending of different backgrounds, cultures and languages and for that matter, practice habits. It was a great learning experience to compare and contrast our different practice habits, the data behind those management habits, and then reach a common consensus to do what we felt was best for the patients that we cared for.”

When he’s not working, Dr. Niven enjoys spending time with his wife Catherine and his three young sons: Carson, 7, Nathan, 5, and Jackson, 3.

“I spend a lot of my time just playing with my kids and trying to help out at home when I’m not at work. I used to be a big runner, and I’ve tried to diversify that habit to include a fair cycling habit as well, so I guess running and biking would be two things that I enjoy. Those and chasing my kids around are probably, to be honest, the things that I do outside of work now,” he joked.

Dr. Niven’s position as an educator has allowed his young family to remain in the same place for a longer time than many other families with military assignments. He considers serving in the military to be one of the best decisions he’s ever made.

“It’s been a fantastic experience from the standpoint of the colleagues, the clinical settings and opportunities I’ve had, and the challenges that I’ve faced as a clinician, manager and leader.”

And, he said, the opportunity to be challenged with leadership roles of progressive responsibility at a relatively young age has played a major part in shaping his career.

“I think that’s been one of the true strengths of my experience in military medicine. The other has been the broadening experience of going to a combat environment, being really forced to rely on my training and experience, and learning how to obtain remote subspecialty consultation and coordinate collaborative care throughout the deployed medical environment and the evacuation chain using what is now a pretty sophisticated network of communication. So, it’s been really fun.”