The Sum of Life: A Lesson From the Grave

He was out of time. At 86 years of age, he suffered from worsening atrial fibrillation, mitral regurgitation, and heart failure. As his cardiovascular system slowly deteriorated, so did the rest of his body. His joints ached, his vision blurred, and his strength faded. Still, Jagmohan—my grandfather or as I called him “Grandad”—understood death's eventuality better than most.

At 15, he and his family were refugees of the 1947 Indio-Pakistan Partition. In his hometown of Parachinar, Pakistan, Grandad personally witnessed childhood friends and neighbors brutally murdered in the streets amidst citywide riots. Fearing the same fate, he and his family purchased tickets to leave the city by train. But as a government employee, Grandad's father was granted an opportunity to leave by plane. On this last flight out of the city, Grandad sat in the plane's cargo hold sandwiched between bulky suitcases overzealously packed, his turban stuffed with his mother's jewelry and the soft orange-purple glow of distant fires in his passenger window. Grandad barely escaped with his life. As it turned out, those who fled by train were massacred. Eyewitnesses described the carnage as horrific, with blood-soaked passenger carriages and bodies littered across the tracks (1). No stranger to his mortality, Grandad welcomed death as an old friend. Over the years, we talked openly about the subject. When asked if he was afraid of dying, he smiled, gently reached out for my hand, and said, “I've had a full life. When it's time, it's time.”

One of the great joys in Grandad's last year of life was my decision to apply to medical school. As a retired mechanical engineer who held several patents and could speak 11 languages, he held education in high regard. As a refugee of Pakistan, he had studied every night under gas-lit streetlights and dreamt of attending medical school himself. However, his family could not afford it. This did not prevent him from becoming a lifelong learner. Grandad was a voracious reader, a talented stock trader, and an admirer of Urdu poetry. Given his childhood aspirations and passion for knowledge, my admission into medical school filled him with pride.

Grandad's health significantly declined in the months before his death. His hospital visits grew more frequent and faint crackles were heard in both lungs. But as fluid leaked into his alveoli, Grandad's heart overflowed with love. He loved to eat freshly sliced cucumbers—from the garden—topped with salt and freshly cracked black pepper. He loved to sing along to Bollywood films, skipping over the words he once knew while humming the melody. But above all else, he loved his family.

Grandad's love for his family was unconditional and unwavering. It was a love known only by those who had struggled their entire lives—not just precious, but sacred. His expression of love ranged from carefully slicing mangos for his grandchildren to paying for part of my college tuition. It was a love that made my memories of him enduring: sitting on his shoulders as a child while he watched the news, learning stock trading fundamentals from him on Sunday mornings, and holding his hand after his mitral stent surgery. It was a love shared between grandchildren and grandparents. A love greater than the sum of its parts.

Weeks before his death, Grandad grew increasingly excited for my White Coat Ceremony. During a visit with his primary care doctor, he said, “I don't care what you do to me! Give me any drug, do any surgery. I need to see my grandkid's ‘White Coat’.” Perhaps the excitement proved too much for Grandad's heart. Perhaps it was just his time. Grandad collapsed one evening after a syncopal episode and died 11 days shy of the ceremony.

As my family grieved and prepared for his funeral the following week, I sat down to write his obituary and was at a complete loss for words. Picture all that Grandad had lived through and achieved. Now, how do you summarize this man's life into just four paragraphs? How do we measure human life? A blank Word document stared back at me. At the time, I did not know how to grasp such a sublime but fragile concept. One moment Grandad was alive and the next he was not. However, my understanding of life and living quickly changed.

The first semester of medical school presented a quantitative framework to understand our body's composition. Cadaver dissections, biochemical signaling pathways, and glass histology slides unearthed the idea that we are a concert of anatomical architecture and molecular constellations, liable to growth and decay. And after much formaldehyde, many multicolored pens, and several hours on the microscope, I initially believed that we are the sum of our parts: a mere collection of organs, tendons, and cells. Yet, my grandfather exemplified that we are so much more. Grandad was not just an 86-year-old diabetic male with decompensated heart failure and an extensive cardiovascular surgical history. He was a survivor of religious persecution, a dedicated student, and a champion of altruism.

This perspective is shared with the Hippocratic oath that Grandad never had the chance to hear. A modern adaptation reads, “I will remember that I do not treat a fever chart, a cancerous growth, but a sick human being” (2). With this perspective, completion of my preclinical years, and 2 years since Grandad's passing, I can answer the questions once posed by his obituary. The measure of human life is nondiscrete, precious, and, most importantly, derived from our connections with others. These connections are everywhere. They are at yearly holiday family dinners. They are in the initial seconds of a trauma admit. They are exchanges of stories. They are in long-anticipated hospice care discussions. They are born in the first few moments of life, and they are cherished in its last. In all of these moments, our existence has value not because of how we spend our time, but who we share it with.

Two days before the White Coat Ceremony, I looked admiringly at Grandad as he lay in his casket. He looked peaceful, arms at rest, donned with freshly polished shoes, his best black suit, and a crisp, maroon turban. The slight bulge in his left lapel reminded us of his pacemaker and all that his heart endured. Holding Grandad's hand one last time reminded me of the loving man before me. It was the same hand that frantically packed canvas suitcases amidst the sounds of enclosing riots and gunfire. The same hand that placed a ring on my grandmother's. The same hand that lifted me onto his shoulders to watch the news. The same hand that cut mangos, that pointed out trending stocks, that held mine when—asked if he was afraid of dying—he replied, “When it's time, it's time.” I was wrong: Grandad welcomed death's eventuality, not because of his childhood experiences, but because he lived a full life, saturated with meaningful and loving relationships with his family. Because of you, Grandad, I know that the human experience is a celebration of our interactions, and we are far, far greater than the sum of our parts. 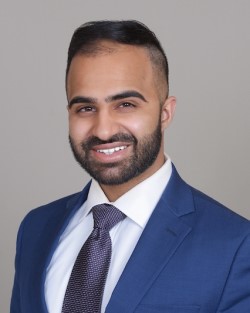 Back to the December 2022 issue of ACP IMpact