Dr. Moises Auron on Championing Community Engagement and the Power of Seeing a Patient Recover 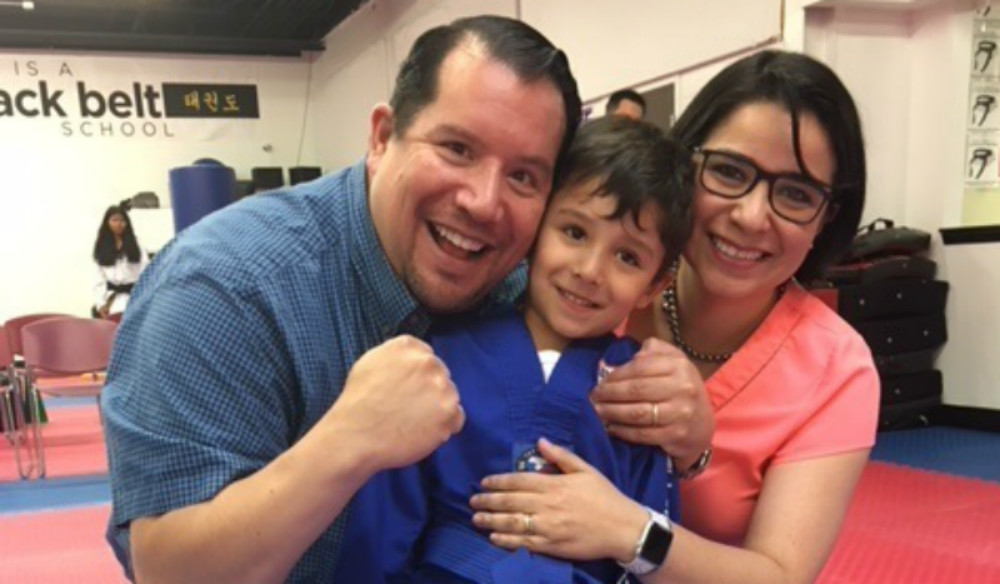 You wouldn't expect a martial arts aficionado who holds a third-degree black belt (3rd Dan) in tae kwan do to be a cheerleader. But when you hear Dr. Moises Auron talk about ACP, you understand.

One of his favorite ACP events is Leadership Day, a yearly two-day advocacy event in Washington, DC where ACP and its members meet with Congress on issues involving internal medicine. He has attended the event for the last several years.

“It's amazing sitting there in front of the representatives and the senators and seeing how ACP is advocating for patients,” he explains. “There's no money in the world that any of these doctors could ever be paid for the value of what they actually do. You can't put numbers on it. It's just their time. It's their passion, their commitment.”

Dr. Auron first got involved with ACP at the state level and early on, had a case selected for an oral presentation. He recalls being overwhelmed by the collegiality, the academic nature of the setting, and the feedback he received. “I saw the energy in the sessions, I saw the energy of the judges and their continuing passion about education,” he says. And those feelings grew even fonder when he attended his first national meeting. “I felt like I was in the Disneyland of medicine. The happiness of the people, how busy the session was, the excellent questions people were asking. It was fantastic.”

He joined the Ohio Council of Young Physicians at the invitation of Dr. Mark Mayer, ACP's Ohio governor at the time. Dr. Auron created a Facebook page for the chapter (back when Facebook was still new) and word of his enthusiasm spread to ACP's Council of Young Physicians (now the Council of Early Career Physicians). He joined the Council after a few years and eventually became chair. “Our joint efforts, along with the mentorship and administrative support of ACP staff, allowed us to promote activities at the local as well as the national ACP meetings to support the professional development of our early career physician colleagues,” he says.

“We were able to participate in mentorship sessions with early career physicians at the National meetings, where we were able to gather their concerns and need,” he recalls. “We also were able to provide recommendations for meaningful engagement within their ACP local chapters, as well as provide resources for career advancement and personal/professional development.”

Passion for medicine, inspired by family

I grew up in a house with lots of medical books and journals. I was always peeking at things like that... For me it was always clear that I wanted to be a doctor.

While at his brother's side in the ICU, he got to know the medical team and peppered them with questions about his brother's care. “I was never planning on coming to the States. My plan was to stay in Mexico to train in endocrinology or anesthesia and critical care,” he says. But Dr. Auron made an impression and it was suggested he continue his residency in the United States. That led to an offer to be an observer for three months. He eventually applied for a combined internal medicine and pediatrics (med-peds) residency, given that he was already an internist in Mexico; he completed his residency in 2007 and he's been a practicing academic med-peds hospitalist ever since.

Both of his parents are physicians (his father is a psychiatrist and his mother is an endocrinologist), but they didn't necessarily steer him into the profession. “I grew up in a house with lots of medical books and journals. I was always peeking at things like that…For me it was always clear that I wanted to be a doctor,” Dr. Auron recalls. As a child he visited patients with both parents. “I used to go with my dad to the psychiatric hospital. I met schizophrenics, I met people with catatonia, and I met people with other psychiatric conditions. When I went with my mom, I met people who were in the ICU and in crisis. I saw my parents really enjoy helping their patients. I saw patients who at first were in really bad shape then I saw them much later, speaking normally, maybe at an office visit. And I realized that my parents could actually make a difference in people's lives.”

We take care of human beings. And human beings are not just biological entities. It's somebody with a soul, with thoughts, with feelings. We see the patient in the most comprehensive way.

Dr. Auron chose internal medicine because he likes the idea of treating the whole person. “We take care of human beings. And human beings are not just biological entities. It's somebody with a soul, with thoughts, with feelings. We see the patient in the most comprehensive way.”

He found that practicing medicine in the United States is vastly different from Mexico. “When I worked in Mexico, we had way less resources that we have in the United States. And in the place where I trained, there was always the energy and the desire to fix things even with the lack of resources. Every time I saw a patient come in literally on the verge of death or in a very critical, life-threatening situation, they were very afraid and very vulnerable. But they're not even aware of their vulnerability. But when I see them awake and leaving the hospital, that's the most meaningful time. There's no way you can compare the satisfaction of seeing that.”

ACP's resources have been invaluable in his career. “We use the Annals of Internal Medicine and ACP Hospitalist and they are brilliant. They're great resources because they really summarize the most relevant literature that's pertinent to our practice. He adds that MKSAP is one of the mainstays for his board recertification and he also uses it for reviewing things and teaching residents.

He tells medical students to always ask questions. “Always be curious. Always ask why. Have a healthy skepticism. 'Why' is the single most important question in medicine,” he says.

Dr. Auron arrives at the Cleveland Clinic at 7 every morning. His days are filled with rounds, patient visits, meetings, lectures for residents, paperwork, and more rounds. But he makes sure he leaves time for his family. “At 5 o’clock I go home and do my own life,” he says, which includes spending time with his 5-year-old son, Eitan, and his wife, Marina Duran-Castillo, a pulmonary and critical care specialist and also an ACP Fellow.

He does manage to carve out time for himself. “I've been doing martial arts since I was 14. I practiced karate in Mexico for several years. I've been doing tae kwan do in the United States for about nine years now,” he shares; he is a Third Dan registered at the Kukkiwon, the world tae kwon do headquarters. He also has trained in Brazilian jiu jitsu and muay thai, and he's a level one in Krav Maga, which is where he is currently focusing his energies. “I like self-defense and martial arts as a way of keeping fit and not necessarily using it in real life.”

With a passion for his family, his patients, and ACP, Dr. Auron is living his best life. “I feel like the most fortunate man in the world...I'm excited to go to the hospital every day. It is a privilege to care for people, to provide them with an answer, or at least search for the answer along with them. It is very nurturing to our souls as physicians to be able to provide compassion and understanding.”

Back to the December 2018 issue of ACP IMpact