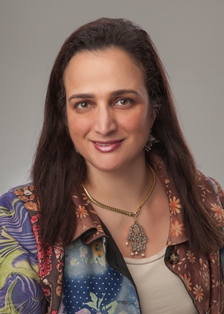 A few years ago, Mona Sarrai, MD, FACP, was completing her residency at a bustling New York City hospital and moonlighting as a salsa dancer. Now, she’s happy to be the only internist within 200 miles of the clinic where she practices in rural New Mexico. The landscape around her may have changed, but she’s able to meet the challenges of being the area’s lone internist by putting patient care first and drawing on her rich background of cultural experiences for perspective.

Born in the United States, Dr. Sarrai’s family moved back to their home country of Tunisia when she was only eight months old. As a child, she was a smart, competitive student who exceled academically. Through advice from her parents and friends, she decided to study medicine as a teenager.

“When I took the baccalaureate exam—which is a national exam after you complete high school—I passed with high scores. I was actually ranked number 20 in the whole country. I did not know what to do; really, it was my parents who pushed me to become a doctor. I did have an uncle of mine who is a doctor, and my parents were very impressed with that, so I think they wanted me to carry on that profession,” she said.

After Dr. Sarrai entered the medical field, some friendly advice from a companion pointed her in the direction of internal medicine.

“When I graduated from Tunisia, I came here to the U.S. and I took the U.S. exams, but then I was not very much familiar with the system here. I was studying with a buddy and she said, ‘Oh, the best thing would be internal medicine,’ so I just picked up internal medicine because of that lady,” she said.

It turned out to be good advice, as Dr. Sarrai ultimately proved to be a natural internist. Although she’s previously worked as a researcher with two published articles in medical journals, she prefers the holistic approach of internal medicine. Described by her husband as a “caretaker,” patient care is at the forefront of how Dr. Sarrai approaches medicine.

From New York to New Mexico

Unsurprisingly, Dr. Sarrai’s shift from New York City to New Mexico took some getting used to. She quickly learned that in such an environment, physicians can sometimes feel as though they’re required to have specialized knowledge in nearly every aspect of internal medicine.

“I am in a rural area, it’s an hour and fifteen minutes south of Albuquerque—I work in the clinic, I see patients with all kinds of complaints and I’m the only internist in the area around maybe 200 miles in the round. I feel like I’m doing a lot of service because sometimes, they cannot travel to see a specialist and sometimes—it’s either the money or the health condition, or they don’t want to go—so it falls back on us, it falls back on the internists to do things at the specialist level because we are the only one,” she said.

Despite the demands that come from working with fewer resources, Dr. Sarrai is fulfilled by the higher degree of influence she yields in patient care due to her status as the region’s lone internist.

“I love it because I do feel like we’re doing something. I moved around a lot—working in a big university hospital sometimes does not give you that much satisfaction as in a rural area because in the rural area, you’re it. So you’re making much more serious and significant decisions for the patient and their family.”

She may not be able to regularly go salsa dancing, but she stays busy with medicine and enjoys relaxing with her husband and their dog, Mooshie. Outside of her job at the Socorro General Hospital, she’s also been committed to chairing some meetings at a local Alcoholic Anonymous family group. Although life in a quieter part of the country is comfortable, her current situation contrasts greatly with her experiences as a student and resident in Tunisia and New York City.

“New York City, I think, is an amazing opportunity for people to train because you see people from all walks of life that you don’t get to see in Tunisia or in New Mexico. I remember we were in a hospital where they spoke 120 languages, so that diversity is very educational to a young physician,” she said.

Ideally, she said, physicians could benefit from starting at an urban center and eventually moving to a smaller, less hectic environment as their careers progress.

“The volume in a big city is also good for training—the doctors will have a taste of what medicine could be and then later, they can choose. The difference in a rural area is that people are more laid back, they’re nicer, there’s less diversity and then the volume is kind of less, not as much. So I think that’s where you probably want to end up later on in your professional life—I would start with a more strenuous program and then go on to a less strenuous program.”

However, neither the city nor the rural experience of doctoring is comparable to practicing medicine in Tunisia.

“In Tunisia, they have lots of poverty, so over there they do not have as many technological advancements as is in the United States in general—whether in a rural or in a very urban area such as New York City. However, you still learn—why? Because with the little bit of means that you have, you have to make a sound decision and save the patient’s life or limb.”

Her education was shaped not only by the North African, Arab culture of Tunisia, but also by French influences derived from Tunisia’s past as a French colony.

“There are things that in the French school of medicine that they do that they don’t do here in the United States, and that gives me a third dimension to be able to look at what is done in the U.S. and maybe take it with a grain of salt and then say, ‘Well, I’m going to do this this way, and I’m not going to do this this way,’ because I have another point of view available to me like a tool that I can use.”

Having few internists to consult with nearby, ACP gives Dr. Sarrai a vital connection to her peers and keeps her informed of advancements at the forefront of medicine.

“For me, it’s important because I feel like I’m connected to a bunch of doctors who help me with my profession every day. When there’s a new publication, a new knowledge or a new policy, I would learn about it through ACP. Reviewing the abstracts, going to the meetings, it makes me feel like I’m contributing a little bit, and by contributing, I’m learning more. I get to meet great people. I get to keep on with my continuing education…it feels like it’s a big family where you belong to better yourself.”

And, she said, ACP has much to offer students and future doctors with continuing education and the College’s growing international chapter.

With so many cultural influences shaping the way she approaches medicine, it’s hardly surprising that Dr. Sarrai recommends traveling as one of the best ways for medical students to educate themselves. She’s particularly fond of Argentina and Morocco, and after her husband completes his coursework this spring, the couple is planning to travel to Europe.

“Here we have so many things available to us that we don’t even realize somehow. But then when you go to a third world country—or any other country—and see how other doctors keep their patients, it improves your education.”