The Thing About Assumptions

I have two things I would like to admit: 1) I am prone to assumptions and 2) When I first heard that my patient's rare disease was primary hypersomnia disorder, I was almost disappointed. It is terrible, but when I initially thought about “rare diseases,” what came to mind was an obviously physically and emotionally debilitating condition. In medical school, you learn about some rare diseases—fibrodysplasia ossificans progressiva where muscle turns into bone and Prader–Willi where a person has a hunger so profuse they can even eat garbage—diseases that capture the imagination with excitement and intrigue. As such, compared with my initial expectations, primary hypersomnia disorder—a disorder of excessive sleepiness—seemed almost tame. That was the start of a series of incorrect assumptions about rare diseases that Janice would educate me on.

When I first heard about Janice's condition, I thought back to the sleep disorders I remembered from class. I thought about narcolepsy, which is a disorder best known for its “sleep attacks” and cataplexy where people have sudden muscle weakness when they experience extreme highs in emotions. I also thought of parasomnia disorders like sleep paralysis and fatal familial insomnia. When I looked at my notes later, I did find primary hypersomnia disorder listed; however, I was ashamed that I could not remember that I had learned about it at all compared with the other sleep disorders I considered more exciting. Once again, I found myself with the false idea that a rare disease equates to exciting and terrifying symptoms.

As we walked through the gardens conversing, I learned that Janice's first inkling of her condition showed up while she was in college when she found herself exhausted despite sleeping for over 10 hours at night and napping frequently. The thing about primary hypersomnia disorder is that even with over 9 hours of sleep at night, naps are unrefreshing and individuals develop what is known as “sleep drunkenness,” which is an extreme period of difficulty waking up after a nap. Her peers noted this cycle of extensive sleepiness and difficulty waking up when she fell asleep during a movie or mid conversation during a date. “There Janice goes again” was a phrase Janice heard constantly throughout her life.

She was limited in the amount of time she could study for classes and unable to stay out late, which were activities most of her peers were capable of doing. No matter what she did, she found herself falling asleep if she ever sat still. Like many people around her assumed, Janice believed her fatigue would be over after she graduated. Unfortunately, it was not. She found herself with the same exhaustion in the years following that she kept attributing to her nursing school stress, the difficulties of raising children, then stress due to her job as a nurse preparing patients on the surgical floor. It was not until her 50s when a very observant physician heard about her tendency to fall asleep during Sunday mass even if she was in the front row that a red flag was recognized. She was sent for a sleep study and diagnosed with primary hypersomnia disorder.

Janice told me that receiving a diagnosis for something you've struggled with your whole life without knowing why is a gift. Finally, there was a reason. Finally, you would know that you weren't crazy. Finally, people would understand. With a concrete medical diagnosis on her chart, Janice thought that her employers, family, and friends would finally understand why she fell asleep during conversations and had such difficulty waking up in the mornings. Sadly, assumptions seemed to prevail. Despite knowing about her diagnosis, Janice's boss noted that her performance was less satisfactory that that of her peers. She would fall asleep during meetings, show up late because of her sleep drunkenness, and be slow to turn in her nursing reports since the sleepiness would worsen whenever she was still.

There is an unfortunate bias in America that sleep equates to laziness. A few years ago, an image was taken of a resident asleep at a desk while on shift in a Mexican hospital. The photographer berated the resident for sleeping when there were patients who needed help. As a result, there was a wave of retaliating posts where medical professionals took pictures of themselves sleeping under the hashtag #YoTambienMeDormi (“I've also fallen asleep” in Spanish) to defend the sleeping resident and highlight the outrageous work requirements of those in the medical field. Although this resident may not have had idiopathic hypersomnia disorder, the bias against sleep is apparent.

When we see someone who has fallen asleep at work, do we ask ourselves why it is that they are so exhausted or do we simply write them up for their negligence? It seems it is much easier to empathize with an individual who has an obvious physical disability than it is to understand the difficulties someone can have with a sleep disorder because of our bias regarding sleep. As evident in Janice's story, medical professionals are not exempt from this bias, even if there is knowledge about sleep disorders. The medical field prioritizes efficiency and timeliness, which often already makes sleep deprivation a norm rather than an exception. These expectations can make a disease like idiopathic hypersomnia a real roadblock in an individual's career, since there is often an automatic assumption that the individual is simply lazy. It is easy to empathize with patients, so why is it so hard to do so with our fellows? Perhaps this is the very first place that medical professionals should start if we want to advocate for patients with rare diseases. Perhaps as medical professionals we should start extending the empathy we have for our patients to our own coworkers who struggle with chronic diseases.

The overriding theme around Janice's story is that we all have assumptions. We have assumptions as a family member, a coworker, and a medical professional that we must actively investigate and correct. Why is it that we can understand when a patient undergoing chemotherapy is exhausted but not a patient with a rare sleep disorder? When we meet someone with a chronic disease, we must place their actions in the context of their disease, since their symptoms can influence every aspect of their lives. We need to ask our patients and friends—who are often experts on their rare disease—to educate us on their experiences. Because the thing about assumptions is, we can't afford to make them when they affect our patients and coworkers. I know this now because of Janice. I hope I do better in the future.

In compliance with HIPPA, all names and identifying information have been altered to protect the identity of the patience. 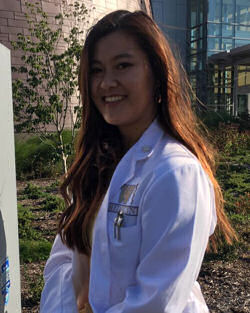 Back to the March 2021 issue of ACP IMpact