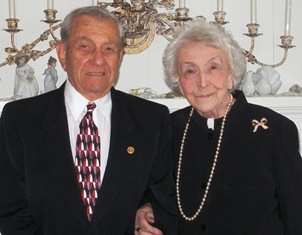 Leo J. Tauber, MD, FACP, who recently celebrated his 99th birthday, can still recall the moment he knew he wanted to become a doctor. He was three years old when a doctor came to his home in New York City to treat him for an illness and at that time, he knew he wanted to become a physician to "make people well." It was a doctor's visit that led to a long and fulfilling life in medicine.

Dr. Tauber was born into a poor family in New York City to immigrant parents from Eastern Europe. His father insisted on working hard so that his eldest son and his two other children, could be educated. As a young student, Dr. Tauber was particularly interested in science and mathematics and carried on the work ethic that he inherited from his father.

While attending the Medical College of Wisconsin, Dr. Tauber decided to specialize in internal medicine. Dr. Francis Murphy, the then-chief-of-staff at Milwaukee County Hospital, greatly influenced Dr. Tauber because of his "dramatic" presentation of medicine. Dr. Murphy's passion for medicine captured the interests of his patients during rounds, and made an impact on Dr. Tauber. Not only did Dr. Murphy demonstrate his passion for medicine and preparedness to teach new physicians, he was a mentor for Dr. Tauber and played a role later in Dr. Tauber's career.

Before settling down in California, Dr. Tauber served the medical profession around the world.

When the U.S. entered World War II, Dr. Tauber volunteered for the U.S. Army Medical Corp, and served as Battalion Surgeon with the 11th Armored Division at Camp Polk, LA, and with the amphibian tractor battalion at Fort Ord, CA. He was part of the invasion forces that landed on Leyte Island in the Philippines in 1944, and later invaded Okinawa, Japan in 1945.

After returning home from the war in 1945, Dr. Tauber completed his internal medicine residency and served as chief resident at Milwaukee County Hospital. As chief resident, he enjoyed his new role, as he was able to establish new, innovative policies and procedures. Dr. Tauber was offered an opportunity by Dr. Murphy, his chief-of-staff during medical school, to serve as his assistant at his private practice at St. Joseph Hospital in Milwaukee. Dr. Tauber greeted patients, performed intake, asked necessary questions, and made notes for Dr. Murphy. Through this opportunity, Dr. Tauber learned valuable lessons about the practice of internal medicine, and revised and edited Dr. Murphy's book on internal medicine, which was later published.

In 1947, Dr. Tauber moved to Ventura, CA to work with one of his former classmates from the Medical College of Wisconsin. He and three fellow classmates from medical school established the Buenaventura Medical Clinic, the first private, multi-practice medical clinic in Ventura County in 1950.

Initially, the clinic provided services for internal medicine, surgery, and obstetrics and gynecology, but the doctors soon learned that their patients needed additional services that fell under other specialties. At this time in Ventura, CA, there were two hospitals that provided care to patients. One hospital, Community Memorial Hospital, was a private hospital, while the County Hospital was a public hospital and did not have any paid personnel. Dr. Tauber and his colleagues provided medical assistance at the County Hospital, while simultaneously building their private practices at the Buenaventura Medical Clinic.

Over time, Buenaventura Medical Clinic grew from the four founding members to more than 50 physicians who provided services in many medical specialties, including pediatrics, dermatology, and gastroenterology. Through word-of-mouth about the "excellent, caring and devoted" care that the physicians provided to patients, the clinic expanded into neighboring cities. The clinic grew organically in the community, and eventually the clinic became the Buenaventura Medical Group which was recognized as one of the premier and most prominent medical facilities of the time. In 2006, Kaiser Permanente bought the Buenaventura Medical Group.

Dr. Tauber served his patients with great care and a sense of humor. Dr. Tauber recalls that his patients enjoyed seeing him because in addition to being an excellent physician, he always had jokes to tell them. He tried to tailor the jokes to his patients and their circumstances. While he realizes that today's physicians likely receive calls via text message, he says that either way the calls come in, it is just something that physicians do. While being "on call" was rewarding for Dr. Tauber, it also was the most challenging aspect of the job for him. As a dedicated physician who worked long and irregular hours, coupled with his devotion as a father of six children, Dr. Tauber often struggled to find the right balance of work life and personal life. He gives his wife of 66 years, Lucy, credit for many of his achievements over the years, and is grateful for her support.

In 1992, after 51 years of practicing internal medicine, Dr. Tauber retired. The profound loss of his 39 year-old son Jeffrey to melanoma left him devastated that he was unable to save his son from the dreadful disease. The doctors had tried every medical procedure available at that time, including clinical trials, but they were not successful.

Dr. Tauber became a member of ACP in 1950 and was named a Fellow (FACP) in 1960. Throughout his membership, Dr. Tauber has served in various roles, including serving as a member of the Governors' Advisory Committee. He received the ACP Laureate Award in 1998 from the California Southern I chapter, which he calls the highlight of his career. "A professional man being recognized by his peers, that's the best honor you can ever have." Dr. Tauber said. The ACP Laureate Award is given to one member of each chapter annually, and is based on excellence in medical care, education or research, and service to the community and ACP.

Dr. Tauber's advice for medical students today is to "love what you do, and do what you love...anything else is fruitless."

In his retirement, Dr. Tauber enjoys reading about medical advancements in the newspaper and checking his emails. He enjoys attending the Internal Residency program, a world-renowned opportunity offered at the Ventura County Medical Center for physicians to learn about advances in medicine, including the most current treatment options. Dr. Tauber has always loved reading, but also enjoys playing solitaire, singing old songs with friends, and telling jokes. At 99 years young, he is clearly continuing with his love of knowledge and medicine.

Maria Tauber, Dr. Leo J. Tauber's daughter, compiled the details and anecdotes that her father shared about his life and career.

Back to August 2015 Issue of IMpact