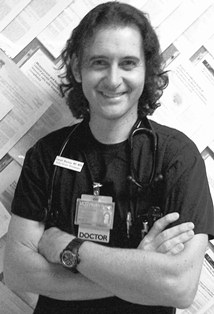 In 2008, infectious disease specialist Dr. Gonzalo Bearman, an epidemiologist and professor at the Virginia Commonwealth University School of Medicine, joined with a colleague to lead a group of medical students to the Li Hicaca region of Honduras.

Their purpose was twofold: to provide medical relief in an impoverished, rural area with little access to clean water or health care resources and to spark students’ interest in global health by demonstrating how public health issues can be addressed in an international setting.

Eight years later, the program (now known as the Global Health and Health Disparities Program, or GH2DP) has returned each year, partnering with the Honduras Outreach Medical Brigada Relief Effort (HOMBRE) to provide relief and develop longitudinal public health projects in the area. So far, thousands of medical consultations have been performed and water filters have been installed in over 300 households, providing clean drinking water and greatly reducing the incidence of diarrheal illness in the region.

“I work both in Honduras and the United States on the individual level with patients and also on the population level…we do interventions, processes, procedures, protocols here in the modern hospital for the safety of the patients, and we try to protocolize public health works in Honduras for the health improvement of the population that we serve there,” Dr. Bearman said.

This intersection of individual and population-based care is essential to Dr. Bearman’s work, and by employing his skills as a writer and teacher, he’s able to inspire a new generation of internists to think globally about disease control.

Born in Argentina and raised in the Syracuse, New York area, Dr. Bearman grew up in a family of physicians but wasn’t always convinced that he’d become a doctor.

As a child, he’d rather have been playing soccer, a pastime he still pursues in a men’s league.

“I think I was a late bloomer—as I was going off to college I thought in the back of my mind that I could potentially go into medicine, and it worked out,” he said.

“My passion in medicine as a profession really took off in the second year of medical school. That’s when I was in the medical microbiology and immunology classes and had some really fascinating lectures by some really excellent lecturers at the University of Buffalo.”

Intrigued by topics like parasitology and microbes, Dr. Bearman decided to specialize in infectious diseases. It was also at this point that he became involved with ACP.

“I learned you had to go through internal medicine first, so that’s a stepping stone to become an infectious disease specialist. I was involved later in the ACP when I became an assistant professor here at the medical college of Virginia, Virginia Commonwealth University…I think that educational role really aligned well with the mission of the ACP,” he said.

Eventually, ACP asked Dr. Bearman to write course book material on sepsis and infectious disease for a third-year internal medicine primer. As a multi-talented physician who not only treats patients but also works extensively in research, education and writing, he particularly appreciates ACP’s commitment to ongoing education—“the education mission and educational advocacy not only of medical students, but also trainees and people that are post graduate or practicing,” he said.

“I think the ACP puts out a really, really high quality publication known as the Annals of Internal Medicine…with not only medical science, but also clinical reviews—things like ‘On Being a Doctor’ which is a kind of perspective on humanism in medicine, reflective writing.”

An avid reader of both fiction and nonfiction, Dr. Bearman has embraced reflective writing as an outlet to blend his separate passions for literature and practicing medicine. His interest in editing, blogging and writing has led to several published articles and the creation of an online magazine.

“With some collaborations of some folks here at VCU—I’m the editor-in-chief—I’ve launched the Medical Literary Messenger, it’s actually been rather successful and it’s become our medical literary magazine at the hospital,” he said.

“The reason I’m really excited about that is because it allows us to explore, you know, disease, wellness, the human condition through narrative and poems and images—it’s pretty cool.”

With free, open access in a wide variety of formats, the magazine is published online twice yearly with a mixture of internal and external submissions. Entries range from fiction to essays, poetry, photography and visual art.

In addition to authoring several books, chapters, abstracts and maintaining a personal medical blog, some of his reflective stories have been printed by external publications. One particular event inspired a narrative that was eventually published by the Journal of General Internal Medicine.

“It was about me seeing, during my runs at a local park, one of my homeless patients—I see him over and over—we’d end up striking up an out of office, unconventional visit just by chatting with him. I’d stop and we’d chat and talk about his medicine and stuff like that in the park. It’s called “An Unconventional Housecall.”

After finishing his fellowship in infectious diseases in public health, Dr. Bearman moved to Virginia and took an assistant professorship at the Virginia Commonwealth University. On a typical day, he’s balancing clinical work with hospital epidemiology, which covers administration, research and infection control.

It was also through the university that Dr. Bearman eventually became involved with the GH2DP.

“The university approached me about 11 years ago…they were basically looking for a faculty member who was infectious disease trained, internal medicine trained, and who spoke Spanish, so I kind of fit that bill,” he said.

Since then, the program has become more formalized and continues to provide longitudinal service to the rural, mountainous area of La Hicaca, Honduras. The trips also provide an opportunity for medical students to gain firsthand experience with medical care outside of the United States.

“I think that the value of global medical training allows students to see the impact of medicine on three fronts: number one is just the clinical care component in resource poor countries, really seeing how care can be limited or shaped in the absence of resources. Number two is the issue of clinical medicine done in a public health perspective, and the students that go with us are able to spend time doing public health projects and works that last much longer than our time in country... The third thing is that the Honduras program also gives them a cultural enrichment of not only medicine in a different environment, but medicine under a different socio-cultural environment.”

For Dr. Bearman, spending time with trainees in Honduras and the United States invigorates both the clinical and academic sides of his work.

“I think that I’m most proud of having been able to have some really awesome trainees with whom I’ve been able to collaborate not only in clinical training and clinical missions, but as importantly, in doing a lot of scientific work in writing papers and abstracts,” he said.

As their teacher, his best advice to medical students is to never stop learning.

“Both the training and the job can be long and arduous, but I think if you really keep a positive attitude and really apply yourself day in, day out, that’s where you’ll find success and happiness. It’s that positive attitude to begin with in the application, always,” he said.

Back to April 2016 Issue of IMpact