"I went to medical school to be an ophthalmologist and here I sit an academic internist," laughs Dr. Andrew Varney, Program Director for the department of Internal Medicine at Southern Illinois University (SIU) School of Medicine. Dr. Varney's path to academic medicine may have followed a less-than straight and narrow course, but any curves he encountered—including a passion for theater and taking a year off after college—never derailed his dream of becoming a doctor.

Growing up in Ottawa, Illinois, Dr. Varney began telling his parents as early as third grade that he was going to be a doctor. His parents, who were closer in age to his friends' grandparents and who had little formal education (his father, born in 1913, was a factory worker with a 6th grade education), might have easily dismissed their son's dream; but instead, the two parents were strong advocates for education and encouraged their son to study and to excel in everything he pursued.

"I wanted to make a difference by helping people," says Dr. Varney, "and somehow, even at that age, I knew science was going to be my platform." Science wasn't Dr. Varney's only interest. By high school, he was a three-sport athlete, had been singing and performing in school plays and community theater since grade school, and his interest in student government got him elected Class President and President of the student council.

With the help of a partial football scholarship he attended Augustana College, a small liberal arts school in Rock Island, IL, but after suffering a few football-related injuries he began looking for another extracurricular activity. When a voice teacher suggested he try out for a part in the school's production of Jesus Christ Superstar, the jock, pre-med student with the golden voice found himself cast in the role of Judas. Dr. Varney admits it was all-consuming, "It took me a bit off course and I didn't take the MCATs that year."

As a result, he spent the year between college and medical school working in a power plant. Dr. Varney, who is fond of saying, "never let a crisis pass without taking advantage of it," has no regrets. "Theater has been a great resource for me in my role today as an educator. I do not suffer from stage fright, except in front of my peers," he jokes.

Dr. Varney married his high school sweetheart, Carol Kaschke, a speech pathologist, and the couple had their first child (Jacob) during Dr. Varney's fourth year of medical school. "The best way to handle that challenge," he notes, "is to do as I did and 'marry a saint.'"

When Dr. Varney was unsuccessful at matching in an ophthalmology program, he says, "I began reflecting on what I really loved doing, and I elected to stay in internal medicine." It helped that SIU's program director at the time, Dr. David Steward, was a committed and generous mentor who saw in his resident the makings of a great internist—a passion for learning, an affinity for leadership, and effective communication skills.

Dr. Steward's instincts were spot on. Just five years after completing his residency, Dr. Varney was named program director of SIU's internal medicine department. In addition to developing and administering the residency program, he teaches medical students, supervises residents in the clinics and occasionally on the wards, and delivers lectures on end of life care and the interface between law and medicine. "We can't have enough physician educator champions," says Dr. Varney, "physicians who understand that to be patient-centered requires an investment to see the experience of illness through the eyes of patients. Like everything we aspire to professionally, role models are key."

Dr. Varney and his wife Carol have four children, Jake, 27; Nick, 24, who is in dental school at SIU in Alton Il; Claire, 21, a junior at U of Illinois who is preparing for the MCATs; and Rose 16, a high school sophomore who plays volleyball and basketball. Dr. Varney pursues hobbies that nurture him and connect him to his family. He enjoys singing with his family in the church choir, gardening (because "stress doesn't grow in a garden"), cooking, golf, and family cribbage matches. "I'm a little competitive," he admits, "but I've learned to take my medicine."

Like his father, Dr. Jake Varney began thinking about a career in medicine as early as 3rd grade. "I was a curious child and I wanted to know how the body worked, so my parents gave me a computer program—Adam, the Inside Story—that used animation to present the physiology of each organ system and how everything worked."

The young Dr. Varney also inherited his father's interest in sports, especially soccer, and his passion for theater. He took piano lessons from 2nd grade through high school, and along the way became an accomplished vocalist. By the time he entered college, he had performed in high school choirs and musicals, and six musical theater productions at the Muni, a community theater in Springfield. Children of Eden and Ragtime were two of his favorite productions.

In college he majored in Molecular and Cell Biology, and performed with the Varsity Men's Glee Club, the University's male chorus and the jazz a capella group No Strings Attached. "Jacob is being modest," injects Dr. Andrew Varney, "To be a member of U of I's varsity men's Glee Club or jazz ensembles is quite an achievement. They seek pitch-perfect vocalists and the tryouts are highly competitive."

Before he chose internal medicine, the "modest" Dr. Varney considered a number of other fields, including biomedical engineering, pediatrics, and psychiatry, but his interests kept bringing him back to medicine. "I liked internal medicine's focus on problem-solving and emphasis on relationships with patients. The opportunity to establish trust with the patient and get a first-person history was important to me."

Dr. Varney admits the study of internal medicine can be daunting. "The biggest challenge is the sheer amount of information to master, spanning all of the subspecialties of internal Medicine as well as basic principles of other disciplines, but I enjoy patient care and trying to help each patient." Dr. Varney currently spends most of his time in the hospital setting, but is undecided about his future. "I enjoy hospital medicine-the acuity of illness, complexity of care, and team-based care-but I also have an interest in hematology and oncology."

Jake is married to fellow internal medicine resident, Brittany Varney (maiden name Harrington), who is pursuing training in radiology. The couple met during their undergraduate years, attended medical school together and couples matched to SIU. In their spare time, he and Brittany enjoy cooking, hosting old college friends who visit, playing board games, and competing in the infamous Varney family cribbage matches.

The making of an internist

"The most positive thing about being an academic internist," says Dr. Andrew Varney, "is participating in the transformative growth of our residents. They begin residency with a scared, apprehensive look, a look that says, 'please don't let me hurt anybody,' but by the time they leave our program they are full of confidence." Residents become what Dr. Varney refers to as "Masters of Sick." "They know what sick looks like, sounds like, and they know what to do about it; and we make sure they have the educational experience of seeing 'sick' wherever it appears-in the ICU, on the floors, in the clinic, in nursing homes, and even in the patient's home when possible."

"As a program director, the hardest thing for me," says Dr. Varney, "is that change has gone from an event to a constant. There is a requisite need for faculty development in areas like quality improvement, patient safety, performance measurement, and competency-based assessment. As a program director you have to be dedicated to not only shepherding residents, but also facilitating in clinical faculty an awareness and a readiness to accept all of these changes in the practice environment."

A unique challenge for Dr. Varney has been navigating the dynamics of his son going through his residency program. "It's a tricky thing," admits Dr. Andrew Varney, "but Jacob and I anticipated a lot of the possible challenges in advance. When it comes to providing feedback, so far, Jacob's trajectory has made it easy. One of Jacob's greatest gifts is his ability to self-critique and map out areas for continuous self-improvement." For both doctors, the opportunity for Jacob to stay in Springfield and meet his professional needs while staying connected to his family in such an intimate way far outweighed the challenges. 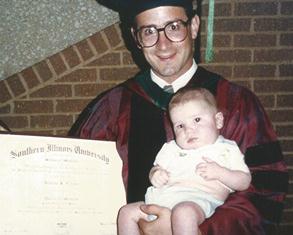 Dr. Andrew Varney, at his graduation from medical school in 1988, holding son Jacob.


"Watching Jacob go through his experience has allowed me to re-live residency, and it has provided a lens to refocus on what's important," says Dr. Varney, "and the additional blessing has been my wife and I have been able to provide a support system for Jacob and Brittany."

It is obvious Dr. Varney is well-suited for academic medicine. Over the years, he has received numerous teaching awards from SIU and is a Courage to Teach awardee from the Accreditation Council for Graduate Medical Education (ACGME). He is also the 2013 recipient of the ACP Illinois Chapter Laureate Award and is currently serving as Chair-elect of ACGME's Educational Innovations Project (EIP). The EIP is a learning collaborative of 21 different medical teaching programs from around the country that share ideas on topics related to graduate medical education, issues like competency-based assessments and ambulatory education.

When asked if he can tell which residents will make great internists, Dr. Varney replies, "We know from our screening process that our applicants are capable test takers, but the vital question is, 'can they relate to people?' As an internist, you need great communication skills, coupled with intellectual curiosity and creativity. If a candidate has those qualities and is dedicated to the outcome of great patient care, that person will be a fabulous internist."

The role of an internist-curious, creative, and caring-is a role for which Drs. Andrew and Jacob Varney seem perfectly cast.

Back to April 2015 Issue of IMpact