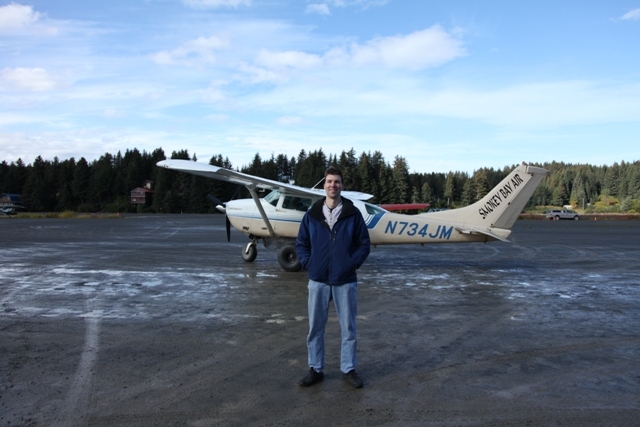 Dustin Engelken was new in town when the Mount Redoubt volcano erupted just 110 miles southwest of Anchorage. It was dead of winter, and the third longest subzero period on record. It was as he puts it, "not the best time to have moved there." A few days after the volcano went off, a local TV station came to the hospital where Dr. Engelken worked looking to interview someone about the health effects of volcanic ash. They chose him. He was a young physician with a new job in a strange town. He felt like a deer caught in headlights. "What did I know about falling ash from the sky?!" he says with a laugh.

Barely two years later, Dr. Engelken knows Alaska well enough that he can look at a piece of Native American art and tell you from which region of the state it came. "You can tell from the patterns," he says. "It's been fascinating learning about the Native American groups in different regions, what the different skill sets are for each, how the crafts and arts are different … their livelihoods-whether they hunt, trap or fish-everything is dependent on the geography."

The Alaska Native Medical Center in Anchorage, where Dr. Engelken works in critical care and pulmonology, is similarly influenced. For example, there is a high incidence of lung cancer, the result of rural residents delaying health care treatment because of lack of proximity. By the time they do come in for diagnosis and treatment, their condition is often well advanced. The patient population is 95 percent Native American and the center delivers a lot of telehealth services because of the sprawling nature of Alaska, and the difficulties this presents for its most remote inhabitants. All of these factors shape daily life at the center.

The 35-year-old Dr. Engelken is up for the challenge. He is upbeat and laughs frequently, finding humor everywhere. Growing up in the Midwest, he was drawn toward medicine and architecture, but eventually decided on a career as a physician and later, as an internist. "As I became more aware of my personality, and how I thought and approached problems, I knew that internal medicine was the right choice," he says. "It's right for me because I love talking to people, but I also like dealing with and solving problems, and I like things done now. I don't like waiting! As an internist, you get to solve problems. In a way it's kind of like instant gratification."

While in residency at the University of Kansas, where he also earned his MD, he fell in love with critical care. "I liked the sets of problems," he explains. "And I enjoy palliative care. That may seem weird, but often with ICU care, you're working closely with the family and there's a connection there." While completing his fellowship at the University of Vermont, his wife, who was training to become an anesthesiologist, got the call for Air Force duty in Alaska, and off they went.

On any given day, you can find Dr. Engelken in either the ICU or the outpatient pulmonary clinic. He likes the intimacy of care and thrives in critical care because of the delicacy of the situation. "In the ICU, it's important to work with the family and the patient on goals of care, on what they want. It's an extremely important part of it. To do that properly for each family, you have to take a deep breath, step back, and look at the big picture."

But not all critical care is end-of-life, and it was in one of these instances that tested Dr. Engelken's resolve. A man in his early 40s had been admitted with acute renal failure and severe diarrhea, and Dr. Engelken was being strongly advised to consider dialysis. But something about that didn't sit right with him, so instead he ordered a quick abdominal CT scan, the results of which reflected his inclination. He started a subcutaneous medicine and within 12 hours the patient was on his way to recovery. A biopsy shortly thereafter confirmed Dr. Engelken's diagnosis. "There is always an element of uncertainty," he says, "but that's one of the reasons I love it. In the ICU, you hover a lot, watching responses, paying attention. It's a fluid dynamic with the patient that I enjoy."

On the pulmonary side, Dr. Engelken sees patients in the outpatient clinic. "We often get calls from rural Alaska," he says. "People who are smokers, who are having symptoms but who are not seeking care. Telehealth is big up here … the struggle is how to integrate our services with patients who can't travel. The question is how do we improve local health? One goal is to integrate telehealth with our pulmonary services, and eventually even into the ICU, to improve local healthcare and keep patients closer to home and family when possible."

You can count on Dr. Engelken being invested in local health. A few years after arriving in the Land of the Midnight Sun, a place he and his wife never would have imagined they'd end up, the Engelken family has found itself a home. In his free time, he lives a full life with his wife and three children, taking advantage of any fortuitous weather. "Alaska can be a nightmare for people who don't like the outdoors, but we do," he says. "It's beautiful here and has been a dream."

Back to October 2010 Issue of IMpact