Dr. Robert Holman was exposed to the field of medicine and the importance of helping others at an early age. His grandfather, Dr. Edward W. Hayes, Sr., was a retired physician specializing in the treatment of tuberculosis and dedicated his retirement to treating underprivileged children suffering from cleft lips and palates. His grandfather would transport children, who would otherwise not be able to afford medical care, from Mexico to Los Angeles Children's Hospital for corrective surgery. "I remember standing at my grandfather's funeral and being astonished that a former child he had helped showed up at his funeral. That had a profound impact on me."

Dr. Holman grew up in Monrovia, California, the son of a surgeon and the youngest of nine children. After receiving his B.A in Latin from the University of California, Davis, Dr. Holman attended medical school at Georgetown University School of Medicine. "I had a great experience at Georgetown, received a sound clinical education and learned a great deal from the tremendous faculty."

Dr. Holman went into his third year of medical school with the intention of going into surgery but realized what he liked best about surgery was the process of diagnostic evaluation. "Every night before a surgical case I would study the Atlas of Surgical Operations. I remember studying for a particular case of a pheochromocytoma as part of multiple endocrine neoplasia and I found myself more interested in the pathophysiology of the disease than of the actual bilateral adrenalectomy." He really enjoyed his rotation in psychiatry at the end of his third year. "I always tell my students that I started out my fourth year of medical school, taking a few courses in internal medicine to start out a residency in internal medicine, and maybe switching to psychiatry. I haven't made that switch yet."

During his fourth year in medical school, the first reports arose of the disease now known as HIV. "Throughout my residency and internship I saw many cases of a novel illness that was uniformly fatal among these young people. I think that experience was the most important thing of my career. Seeing the seriousness of the illness firsthand in HIV patients at a time when little was known about the disease solidified my decision to specialize in infectious diseases."

After finishing medical school, Dr. Holman completed an internship in internal medicine at Grady Memorial Hospital, which is affiliated with Emory University in Atlanta, Georgia. He returned to Georgetown to complete his residency in internal medicine and spent a year as chief resident. During his internship at Grady Memorial Hospital, he gained invaluable clinical experience treating a variety of advanced diseases within the indigent population of Atlanta. He completed his fellowship in infectious diseases at the National Institutes of Health (NIH) in Bethesda Maryland.

While completing his fellowship in infectious diseases, Dr. Holman soon realized that although he enjoyed research; he missed the clinical aspect of medicine. "I distinctly remember getting a call about a patient with a heart condition aortic regurgitation as part of her Takayasu's arteritis who had developed acute shortness of breath. I hung up the phone to head to the clinic. As I packed up my research clones into an incubator, my research partners were so focused on their work that they had not even heard the phone ring. It was at that moment that I realized my research partners had such a different temperament than I-much more suited to the undisturbed concentration that a researcher craves, whereas I knew that I was someone who could thrive with a beeper on my belt."

Dr. Holman opened a private practice in infectious diseases at the same time he was offered the position of Residency Director at Virginia Hospital Center, Georgetown's teaching affiliate hospital. When he opened his practice in 1989, his clinical work was focused on taking care of HIV-infected patients in the era before effective antiretroviral therapy. He balanced the responsibilities of running an outpatient practice along with a busy hospital consultant practice and the demands of a residency director position, which he held for 11 years. 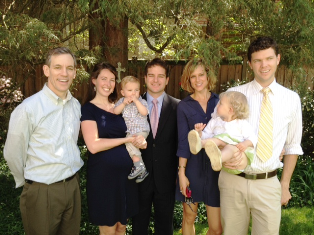 Dr. Holman (left) with two of his nephews and their families.

Currently, as Associate Dean for Medical Education and Professor of Medicine, Dr. Holman is in charge of overseeing the student clerkships for medical students in internal medicine during their rotations through Virginia Hospital Center. He enjoys working with the students, teaching them at the bedside every day, and the opportunity it affords him to advise students about their career paths. He admits that he "has learned much more than he has taught" and values the fresh approach that medical students carry with them into their clinical rotations.

In addition to teaching students and running his infectious disease practice, Dr. Holman spent 8 years developing questions for the United States Medical Licensing Examination Step 2 as part of the Test Material Development Committee. "It is a great experience working with faculty members from other schools comparing and contrasting our experiences working with medical students." He now serves on the Step 2 committee for the National Board of Medical Examiners.

Although he admits that balancing his private practice with his administrative and teaching role at Georgetown is often challenging, it is a career path that he has found extremely fulfilling and rewarding. Dr. Holman recently completed the Georgetown IronMed Triathlon, which benefits the Hoya Clinic, a Georgetown student run clinic, which cares for the homeless population of Washington, DC. When not training for triathlons, Dr. Holman enjoys reading, gardening, and even finds a little time to volunteer at the Gift of Peace, a long-term residence for homeless and HIV-infected residents in DC, run by the Missionaries of Charity.