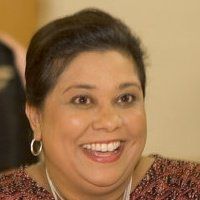 In high school, Kavita Persaud won state competitions in debate. She was average in science but strong in English-a natural inclination that her father, a family practitioner, told her would be one of her greatest strengths as a physician. Working in his office as a teenager, Dr. Persaud saw how her father helped his patients and how much they appreciated him for it, and she wanted to do the same. Years later, she fulfills that goal every day at her own practice, as an internist specializing in geriatrics. She enjoys being there for her patients. "When the exam door closes, it becomes a place where people can talk," she says, "and I am there to help."

She knew her decision was the right one while completing her fellowship in geriatrics at State University of New York at Buffalo, and later working as a medical director at a Lutheran hospital and a senior health service in Indiana. She loved the team approach of both geriatrics and internal medicine, and thrived in an atmosphere in which she could work closely with others.

She also cherished the special bond she shared with patients and their families. "There's so much connection with the families, it's so rewarding," she says. Today, nine out of ten cards covering Dr. Persaud's office walls aren't from patients, but rather from relatives of former patients who have passed away. "It means a lot," she says.

Dr. Persaud cites home visits with her terminally ill patients as a special part of her work. She talks of one patient in particular. "Grace's name suited her so perfectly because she was a woman of true grace," recalls Dr. Persaud. "She was dying but able to be at her daughter's home with caregivers during that time. I was truly impressed with her courage and her certainty with all her decisions. I learned so much from her-we need to keep learning from patients." Prior to entering the terminal phase of her illness, Grace spent a year maintaining a tight regimen to manage her serious cardiac condition. She got blood tests every Monday and visited with Dr. Persaud every three weeks. The efforts allowed Grace to live a better quality of life, says Dr. Persaud. "We were able to keep her out of the hospital and she had a good last year."

The European
In 2001 Dr. Persaud and her husband, an anesthesiologist, relocated to North Carolina. She worked for a group practice for several years and then in 2002 life changed when their daughter was born. As her daughter grew, priorities shifted. She decided to open her own practice to give herself more flexibility with her daughter and the ability to control her own business.

And while many wouldn't consider owning and running a private practice a "low stress approach," Dr. Persaud holds a different view. Ever since her years as an undergrad at Queens University at Belfast, Ireland, she has embraced a European way of life, one she describes as more balanced with an emphasis on leisure. Working as an internist lets her have it all. "After my daughter was born, I wanted more flexibility and less stress," she explains. "I can change my days when I need to, and I love the model of my practice."

It also allows her the opportunity to pursue other interests. In addition to her work treating patients at her private practice and at a local nursing home, Dr. Persaud serves on a board of directors for a community literacy program, participates in quality improvement projects with ACP, coaches a high school debate team, and discusses health topics every Monday on a local radio show. "It's all about getting involved, diving in head first," she says. For the radio show, "Talk of the Town," Dr. Persaud often chooses subjects that are timely or seasonal. On a recent show, Dr. Persaud discussed a topic close to her heart-how to choose a nursing home for a loved one. "People need to be able to look past the chandeliers and mahogany furniture," she says, "It's not easy to assess quality of care."

Just as her father had done with her when she was young, Dr. Persaud will sometimes bring her daughter into the office. As a seven-year-old, her responsibilities are limited, but every once in a while Dr. Persaud will let her stamp envelopes. It's a simple job but one full of meaning; a family tradition of sorts.