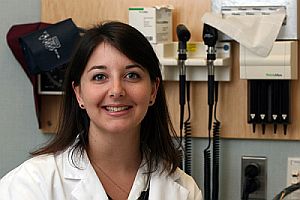 On the morning of October 5, 2009, Mandy Krauthamer Cohen dressed in a black suit fit for a day at the White House. As the executive director for Doctors for America, a grassroots group of 16,000 physicians and medical students, she and 50 of the organization's members from across the country had been invited to meet with President Obama in the Rose Garden for the White Coat Rally. It was an exhilarating day. In the Oval Office, after meeting the president, she listened as he spoke about the importance of physicians being involved in the policy making process. The message resonated with everyone in the room. "The best moment for me was watching the expressions of our members as the president thanked and recognized each one of them personally for their commitment to building a better health care system for our country," she says. "That I would say has been one of my proudest moments as a physician."

A Mother's Touch
In the midst of the most highly charged time of health care debate in years, Doctors for America has gained momentum and membership at mach speed for such a young organization. Compared to major U.S. physician groups that are accustomed to the bright lights and scrutiny, DFA is a relative infant-the AMA has a history of 163 years; ACP, 95. Like the organization itself, the leadership of DFA is young; Dr. Cohen is thirty-one. In the past year, she has found herself in the media a lot, including CBS and MSNBC to name a few, not only voicing the views of the DFA membership, but more often than not, in the middle of hotly contested debates. In these interviews she is composed, articulate and well informed. She prepares by reviewing current legislation and data.

But long before Dr. Cohen rubbed elbows with the president or appeared on CNN, she decided to become a doctor, a process that began back in Baldwin, New York many years ago. As a girl, she would spend time listening to her mother talk about her overnight shifts working as a nurse practitioner in an ER, and she remembers the caring in her voice. "She always spoke of her love for her patients," Dr. Cohen says, "and while she is very modest about how hard she works, she has touched the lives of thousands of people in her community. I remember how patients would stop her at a local store or restaurant to thank her for taking care of them when they were sick." Witnessing her mother help others in need infected her with the desire to do the same. "My mother was a big influence on me. I wanted to help people like she helped them-in times that were hard for them, even if it meant just holding their hands," she explains. "Internal medicine is personal and I like that."

Born to Lead
After completing her undergrad at Cornell University, Dr. Cohen went to medical school at Yale, and three years into that, pursued a master's degree in public health from Harvard. Her internship and residency was spent at Massachusetts General Hospital. On her curriculum vitae, Dr. Cohen's leadership experience reads just as long if not longer than her actual work experience. She began in 2004, while still in medical school, taking a position with ACP's National Council of Student Members. Since then, she has served on several committees for Massachusetts General Hospital (MGH) in primary care, quality assurance and recruitment. Most recently, she has served as co-director for the Health Policy Elective at MGH, as the northeast representative for ACP's National Council of Associates, and as a founding member and national outreach director for Doctors for Obama.

This experience has prepared her well for her current position. A typical day for Dr. Cohen begins with reading and responding to emails from physicians across the country. She then reads up on the latest health care news, and often participates in several conference calls with other professionals involved in reform. She does a lot of writing, including blogs and op-eds. She says being an internist is a good foundation for her work. "With internal medicine, you have a broad perspective of medicine and the health care system," she says, "and there are always new challenges every day." She also credits her involvement in physician organizations and community service for much of her success. "I think that being involved in physician groups and other organizations and efforts is important to professional growth because it helps you know what's going on, and you can connect with colleagues from all over the country," she says. "It gives you a broader sense of medicine."

The Ultimate Hobby
In between all of the talking, reading and writing, Dr. Cohen gets back to the basics, the reason why she got into all of it in the first place-patient care. "Much of what we're talking about in legislation reform has to do with primary care," explains Dr. Cohen. "The fact that I'm an internist has a lot to do with why I can speak to these issues. It's all about bringing it back to the patient." Dr. Cohen does her part bringing it back to the patient every week when she volunteers at the Department of Veterans Affairs (VA) Medical Center in Washington DC, something she says is not only important for keeping her clinical skills fresh, but because it gives her time to spend in patient care, which she loves.

Working for the VA feels like home to her as well, as it was her first job out of residency, working as the deputy director for women's comprehensive health. In this role, she led an initiative to review and improve the delivery of care to women veterans throughout the country. Much of the work involved training and teaching at VA centers. Dr. Cohen says working for the VA is an absolute pleasure. "Working with women veterans was incredible," she says, "and from a career standpoint it was fascinating to work in the largest health care system in the country, trying to implement change. The VA system is already leaps and bounds ahead in information technology and quality improvement, so to be on the forefront of that was quite an opportunity."

When she's not working, Dr. Cohen likes to travel and spend time outdoors with her husband, who is a lawyer. Recently they traveled to Tuscany for their honeymoon. They like to cook as well, and they play together on a recreational soccer team. Dr. Cohen had never played soccer before, but her husband taught her how to play, and she is giving it her best. But at the end of the day, what Dr. Cohen really loves to do-what she feels passionate about-is her job. Long before it was a necessity, she was an avid reader of Politico, Roll Call and The New York Times. "Going to work" never is a chore for her because she thrives in what she does and is committed to it. "The greatest thing about my job is that it feels like a hobby," she says. "There's a saying that when you love what you do, you never work a day in your life. That's how it is for me."

Back to January 2010 Issue of IMpact