As a teenager, Dr. Christopher Mays had long blond hair that hung to the middle of his back, little academic ambition, and notions of becoming a rock star or professional athlete. But by the time he graduated from high school, that boy was long gone, replaced by a reflective, deeply faithful, and purposeful young man who dreamed of doing something useful with his life. That something turned out to be internal medicine.

The catalyst for the transformation was a failing kidney which landed him in the hospital for four major operations between the ages of 12 and 18. The experience was trying yet defining, as it served as his introduction to the field of medicine. "I was in the hospital a lot," he says, "and so I ended up developing a relationship with my surgeon. I liked him and knowing him had a positive effect on me. Around the same time I also began to grow in other ways. Religious faith became important to me, and I saw in medicine the opportunity to serve people and utilize my faith as well." 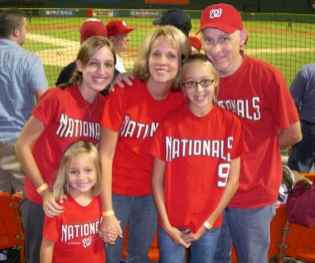 Dr. Christopher Mays with his family

Embracing Stereotype
Dr. Mays says one of the best things about practicing internal medicine is being tested. As he explains, most of what an internist faces every day is the result of multiple systems interacting with each other, creating multiple problems. "There is a stereotype—they say that internists think and surgeons do," he says, "and that’s fine with me. I like the fact that I am the one who is able to figure it out."

Getting to that point required commitment. For Dr. Mays, that meant medical school at the University of Maryland followed by residency at the Washington Hospital Center in Washington, D.C. As is the case with most physicians, his training was not one-dimensional. For example, it was one of his mentors during his introduction to clinical practice, whom he credits for teaching him how to perform a physical exam and conduct a patient interview. "It was because of him that I really began to understand how to integrate all of the systems in the body and put them all together," he says. "I admired this guy because of his ability to teach us this in a way we understood."

Dr. Mays practices medicine in the same area where he grew up and went to school, in Gaithersburg, Maryland, a suburb of Washington, D.C. His familiarity with the community has been a benefit to him as an internist who owns his own practice, allowing him the unique opportunity of knowing many of his patients well, something he cherishes greatly. "I like the continuity of the care I give," he explains, "I like the stimulation the work gives me. I like having relationships with my patients, treating the whole family, and being there for all of the major events in their lives."

His affectionate and generous nature extends beyond the office. He works with local hospital leadership staff and also as medical director for a local nursing home. He recognizes the very real need for quality care in such facilities, and he sees patients as people, not cases. "A lot of people still need care when they leave the hospital," he explains. "And the elderly have many medical needs—some have many needs, while others are just frail. I’m glad I can be a part of that."

Growing Up
As a teenager and later as a medical student, Dr. Mays was influenced and guided by mentors and others who had a positive effect on him. For example, during his junior year rotation, he identified strongly with his attending. "He was kind of a younger guy so I related to him because of his age," recalls Dr. Mays. "I thought he was very, very smart and he possessed a genuine compassion for patients. I was still very impressionable at this point, you know, and I thought he was awesome."

Now, as a well established physician running his own private practice, the 46-year-old is filling the role himself. Eight years ago, a senior high school boy named Luke came to Dr. Mays and asked him if he could observe him at his practice. He was outgoing, had an easy smile, and aspirations to be a physician. Dr. Mays agreed, and soon recognized qualities in the 18-year-old that impressed him. "Even at that time, I could see qualities in him that would make him a great internist," he says. "His thinking processes were logical, he had compassion for others, and he was a skilled communicator." Luke went to college and when it was time to apply to medical school, he again returned to Dr. Mays, asking him to write a recommendation letter to the admissions director, who ironically had been a mentor of his. He was happy to oblige. "I said in the letter that you couldn’t ask for a better student," he recalls. Three years later, Luke has returned to Dr. Mays as he prepares to apply for internship and residency.

His commitment to young people resonates on more personal levels: as a youth group leader with his church, a role he shares with his wife, Jean, and as a father to three daughters. The middle daughter, 14-year-old Janelle, is a cross country runner, just like her dad used to be when he was her age. He admits he enjoys this because it reminds him of a time in his own life that was so special. Some thirty years ago when Dr. Mays himself was on the team, he and his teammates had to run a daily route that took them past a house across the street from the school. There was a girl named Jean who lived inside the house, who was two years younger than Dr. Mays. Although she remembers seeing him running past her house every day, Dr. Mays insists she did not think much of him at the time. Eventually however, he won her over and the two began dating while in high school. Just as surely as he decided on medicine as his chosen profession, he knew that Jean was a keeper. "She was pretty, fun to be around and made me laugh," he says.

Personal Practice
Now currently in his senior year of medical school and newly married, Luke, Dr. Mays’ protégé, is ready to pick a career. Dr. Mays hopes it will be as an internist. "It’s been so rewarding just to watch him, all the way from high school until now," he says. "It’s been nice to know him in other ways as well—my wife and I even give them advice about marriage. I would like to see him pursue internal medicine since he is such a great physician—and my dream is that he would come work with me in my practice, but we’ll see."

Dr. Mays leads a full life, surrounded by and working with people he loves and enjoys. He tries his best to bring something unique to each of their lives, and seems to be rewarded for it with happiness. He says being an internist has allowed him to live the life he wants, which for Dr. Mays is a life shared with others. "I could talk for hours about what I find rewarding about being an internist," he says, "but knowing someone like Luke and being able to teach him and watch him grow has been one of the best rewards."

Back to December 2010 Issue of IMpact