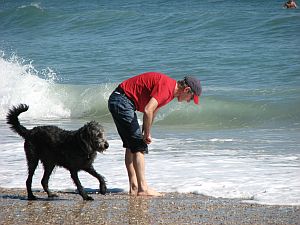 It's a Thursday afternoon around 2 p.m. and Trig Brown's voice is still hoarse from the night before when he and his wife attended a Paul McCartney concert. "We know all of the songs so of course we had to sing every one," he says. The fifty-eight-year-old Dr. Brown is an enthusiast of many things, above all, his work. You won't catch him playing the hero. "It's not the dramatic outcomes or stories that give me satisfaction as much as the everyday things, like talking to my patients," he says. "That's what gives me life and energy."

Mind and Body
Growing up in southwestern Missouri, Dr. Brown would watch his father treat patients as the town's general surgeon. Since the town was small, his father often practiced as an internist as well. He held his father in awe. "There were times when he would let me observe and I remember being completely intimidated by that, but watching him take care of all of these patients made it an easy decision to become a physician and also an internist," he recalls.

After graduating medical school at Washington University, he headed east to complete his internship, residency, and Fellowship at Duke, where he developed a taste for academic medicine and psychology. He stayed on at Duke working as a junior faculty member. He and several of his colleagues created a combined psychiatric/medical clinic, a time which was both difficult and exciting. The mind/body ideology had yet to catch on with the profession and patients alike, which made many things an uphill climb. Yet as Dr. Brown explains, it was also this fact that made it worthwhile. "I felt like we were doing something innovative," he says.

He has carried this head-first approach with him since he left the world of academic medicine in 1991 and calls upon it frequently today as a general internist at Durham Internal Medicine, where he has been since 1999. A recent visit with a patient illustrates how he uses the skill. A regular at the practice, the patient would present with a combination of symptoms, including muscle-skeletal problems and depression and anxiety. During her last visit, she complained of palpitations and shortness of breath. As she talked and Dr. Brown listened, she grew panicky as she revealed what Dr. Brown recognized as the underlying root of her anxiety: a problematic and stressful relationship with a sibling. When he made a suggestion for how to better cope with the situation, she replied, "No one ever told me I could do that."

It's this approach that defines Dr. Brown. "I make a conscious effort to listen," he says, "because as an internist, you deal with people on levels that are so profoundly deep that you need to be listening. You talk to people about aspects of their lives that they can't talk to about with anyone else."

Good Things
A letter and a race number hang framed in Dr. Brown's office. He looks at it every day and thinks of the patient who sent it-a man well known in the Durham running community. He came to Dr. Brown's practice with a complicated clinical syndrome with fever, abnormal liver function, weight loss and sweats. The patient had seen an infectious disease specialist and even a general surgeon, but no one could determine the man's condition. Finally, a rheumatologist diagnosed him with adult stills disease, a rare condition. Dr. Brown had never seen it before. "by that point, I'd been in practice for 20 years, and I'd never seen it!" he explains, "and this is one of the best things about being an internist-every day you are going to be challenged by something you've never heard of." Dr. Brown and his colleagues treated the man successfully; three months afterward the letter came. It read "Thanks to you I'm back in the races." As a runner himself, Dr. Brown appreciates how much it means to the patient. "Being there for my patients means everything to me," he says.

At Durham Internal Medicine, Dr. Brown works with a group of 14 other physicians and specialists. He loves the work and the life it gives him. He sees about 17 to 22 patients a day and says the practice is set up in such a way that he can practice the kind of medicine he wants to. "I determine my schedule, I can treat my patients the way I want to," he says, "and I have time to do the things I want." Among those things, spending time with his wife of 30 years, Victoria, and running. He says music is a way for him to nurture his soul, and while he used to be a marathoner, he gave it up after he noticed that he was training too hard for the Boston marathon. It had become more of a pressure than a joy, the latter being something Dr. Brown refuses to go without. He's also found an unlikely home in Durham, NC, far away from his native Missouri. As a young man in college and in medical school, he assumed he would one day return, but as he explains, fate proved otherwise. "Good things just kept happening to me here," he says, "and becoming an internist was one of them. Looking back, I know that this is what I was meant to do."

Back to August 2010 Issue of IMpact