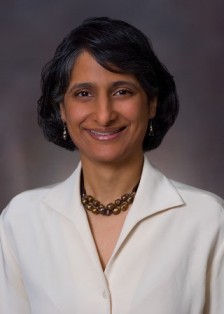 Growing up in a small town in New Mexico, Dr. Sima Desai remembers a local surgeon who had a remarkable impact on his patients and the community. Seeing how the surgeon gave back to the community exposed Dr. Desai to the giving nature of the medical profession. "When I first thought about being a physician I thought it would be a profession about doing things, rather than giving back, and it was the giving part of being a physician that really struck a chord with me and became my road to medicine."

When entering medical school at the University of New Mexico, Dr. Desai was torn between choosing pediatrics and internal medicine. She was drawn towards internal medicine because of the mentors she had in medical school. "Often the mentors that you find and the kinds of people that you think you would be happiest sharing your professional life with play a major role in choosing your career path in medicine."

Medical school was a pivotal time in Dr. Desai's life. "I grew in a way that I had never grown before and I attribute that to my mentors and colleagues as well as my interactions with patients," said Dr. Desai. She believes that students are in a very privileged place to interact with their patients. "It is those experiences as a student that allows you to say 'Wow, I have the privilege to be part of this person's life and his or her health care.'"

Dr. Desai had many important mentors in medical school that helped her to evolve as a student. She was drawn to the idea of treating adults and the opportunity to have families involved in patient care. She found various similarities between other residents in internal medicine and herself and was excited at the thought that her peers would become her professional family. By her fourth year of medical school, she realized that her mentors had become her role models and she wanted to give back to the medical community in the same way that her mentors had done.

Leaving New Mexico was a hard decision for Dr. Desai but one she does not regret. Her mentor suggested that she interview for residency outside of New Mexico to gain a different perspective and suggested interviewing for an internal medicine residency program at the Oregon Health & Science University (OHSU) in Portland, Oregon. During her interview, Dr. Desai had the opportunity to meet Dr. Tom Cooney, Program Director of the Internal Medicine Residency Program and a future mentor. After completing 14 different residency interviews Dr. Desai matched with the OHSU Internal Medicine Residency Program. "As I tell students now, you may think it is hard to imagine making a decision about the next three years of your life based on visiting a school for one day, but there is something to be said about trusting your intuition."

During medical school and residency, Dr. Desai had never seen herself as a teacher. Even now in her role as Program Director of the Internal Medicine Residency Program she feels that she has much to learn.

When Dr. Desai was a second year resident, she was the leader of her residency team and enjoyed the aspects of teaching and working together in a team dynamic. Several of her mentors at OHSU encouraged Dr. Desai to apply for the chief resident position. After receiving the position, she began to develop an appreciation for being in a teaching environment that was both exciting and challenging.

After finishing her chief residency position, Dr. Desai and two of her colleagues were approached by Dr. Alan Hunter, a faculty member at OHSU, and asked to begin a program for hospitalists at OHSU. Dr. Hunter asked if Dr. Desai and her colleagues would like to be the inaugural faculty in the hospitalist program. "It was the opportunity of a lifetime, to be given salary support to be both a clinician and an educator."

Several years later, Dr. Cooney approached her and asked if she would be interested in the position of Associate Program Director at OHSU. By this time Dr. Desai realized that the two things that she loved the most were taking care of patients and teaching and accepted Dr. Cooney's offer. "They continually challenge me to become better than I am," said Dr. Desai of the students and residents she teaches.

Dr. Desai laughs that she could never see herself as the Program Director of the Internal Medicine Residency Program at OHSU but now has the unique privilege of sitting in the same office where her mentor Dr. Cooney once sat.

Dr. Desai took over the position of Internal Medicine Program Director after Dr. Cooney's 26 year tenure in the position. Dr. Desai faced the challenge of stepping into Dr. Cooney's shoes and making sure the legacy that he created at OHSU continues. Dr. Desai looks forward to leaving her own mark on the Internal Medicine Residency Program and believes she is in a position to improve the educational environment of internal medicine residency programs for residents. The experience for Dr. Desai has been both exciting and challenging; "In the end as an educator, what you really to strive for is to ensure that the residents that graduate from your program can be the very best at what they do because that's what patients and the public deserve."

Dr. Desai balances her role as Internal Medicine Program Director and mother to her six-year-old son. "Maintaining life-work balance is a scale that tips back and forth for me. When I find I am spending more time at work, then I try to be conscious and actively self reflect on what I should do to maintain as much equality in my life as possible."

She spends her free time participating in activities with her son such as basketball, baseball and Tae kwon do. In addition to spending time with her partner of 16 years and her son, Dr. Desai enjoys biking to work, hiking and cross country skiing.

She credits her membership with ACP as another huge pivotal part of her life. As a young faculty member, Dr. Desai received the Walter J. McDonald Award for Young Physicians from ACP. As a result of receiving this award, she was given a chance to be part of ACP's Council of Young Physicians. "Being a part of ACP allowed me to evolve in my thinking and offered me a chance to meet extraordinary people who have made me a better leader and educator. If a position paper came through or policy went into effect, being part of the Council of Young Physicians gave me an opportunity for my voice to be heard."

Throughout her leadership roles with ACP, Dr. Desai served as the Vice Chair and Chair of the Council of Young Physicians and was also an ex officio member of the Board of Regents. " It was such a privilege to watch how a large group of physicians who can have very different opinions can come to a middle place and have an organized thought about our values and what we care about as internists."

Dr. Desai continues her involvement with ACP at the local level with the ACP Oregon chapter and remains in contact with several of her mentors.

Back to April 2011 Issue of IMpact