A growing number of states are banning gender-affirming health care and pursuing anti-LGBTQ+ legislation, contrary to ACP policy, which urges non-discrimination in health care.  ACP opposes these restrictions on health care for transgender individuals, who already may face extreme barriers to accessing care, and strongly objects to any unnecessary government interference with any health care services.

In 2021, Arkansas became the first state in the country to ban gender-affirming health care for transgender minors. Since then, Tennessee, Arizona, and Alabama have also enacted laws restricting access to gender-affirming care, and 11 other states are considering such bans as of March 2022. Alabama's ban included the harshest penalties of any legislation passed thus far, making the provision of gender-affirming care a felony punishable by up to 10 years in prison. Though legal challenges have so far kept these laws on hold, these health care bans are part of an increasing trend of anti-LGBTQ+ legislation proliferating at the state level, with a record of nearly 240 anti-LGBTQ+ bills introduced in 2022.

The Office of Population Affairs at the U.S. Department of Health and Human Services (HHS) defines gender affirming care as “an array of services that may include medical, surgical, mental health, and non-medical services for transgender and nonbinary people. For transgender and nonbinary children and adolescents, early gender-affirming care is crucial to overall health and well-being as it allows the child or adolescent to focus on social transitions and can increase their confidence while navigating the healthcare system.” Gender-affirming care is evidence-based medicine supported by many prestigious medical organizations, and study after study shows that gender-affirming care reduces depression and suicide among transgender youth. ACP and other leading medical organizations have condemned efforts to criminalize gender-affirming care and other evidence-based care as interference with the physician-patient relationship.

While restrictions have primarily focused on preventing minors from accessing gender-affirming care, states have increasingly targeted transgender health care for adults, including up to age 25 in Missouri. Additionally, Arkansas’ law has banned insurance coverage of gender-affirming care overall for both public and private insurance plans, as would about half the bills being considered by other states.

The Williams Institute at the UCLA School of Law found that over 58,000 transgender youth and young adults are at risk of losing access to care in states that have restricted access to gender-affirming care or are considering doing so. Beyond immediate impacts, these laws drive stigma and endanger the wellbeing of LGBTQ+ youth. According to the Trevor Project’s 2021 National Survey on LGBTQ Youth Mental Health, 94 percent of LGBTQ+ youth reported that recent politics have negatively impacted their mental health.

ACP has decried discriminatory policies against LGBTQ+ people and objected in particular to the interference with the physician-patient relationship and penalization of evidence-based care. ACP believes that physicians and other health care professionals should not fear criminal punishment for providing the medical standard of care, nor should the government attempt to force disclosure of patient information related to gender-affirming care. ACP policy also calls for coverage of comprehensive transgender health care in private and public insurance plans.  In addition to speaking out against these harmful laws, ACP has joined amicus briefs in legal challenges discriminating against transgender people and will continue to support legal and legislative efforts protecting against these medically unsound and dangerous restrictions.

The Biden Administration has taken multiple actions to address this legislative trend. On March 2, 2022, HHS clarified that physicians and other health care personnel are not required to disclose patient information regarding gender-affirming care and that denials of care based on gender identity are illegal. On March 31, the U.S. Department of Justice wrote to state attorneys general warning that bans on gender-affirming care are unconstitutional and violate multiple federal laws. HHS has also called for physicians and patients who believe they have been discriminated against on the basis of gender identity or disability in seeking to access gender-affirming care to file a complaint with the department’s Office of Civil Rights.

HHS also proposed a new rule in December 2021 banning health coverage-related discrimination based on gender identity or sexual orientation. While the new rule has not been finalized, ACP has expressed support.

HHS additionally proposed a new rule in July 2022 that revises its interpretation of the Affordable Care Act’s anti-discrimination provision, Section 1557, which would strengthen legal protections for transgender patients and other groups impacted by sex-related discrimination.  ACP wrote a letter to HHS Secretary Becerra providing comments in support of the proposed anti-discrimination rule.

Efforts to Restrict Gender-Affirming Care: Most gender-affirming care restrictions either criminalize physicians – sometimes with extreme penalties, such as a bill passed by Idaho’s House of Representatives carrying up to a life sentence for those who provide a minor with gender-affirming care – or make them subject to civil penalties or professional discipline through state licensing boards. Bills in multiple states (Alabama, Idaho, Kansas, Michigan, North Carolina, Oklahoma, South Carolina, and Tennessee) would also establish penalties for parents who facilitate their children’s access to gender-affirming care, including by designating this health care as abuse.

While Texas bills to ban gender-affirming care for transgender minors have not passed, the state has used administrative means to restrict access. After Texas Attorney General Ken Paxton issued an opinion describing gender-affirming care as child abuse, Governor Greg Abbott instructed the Texas Department of Family and Protective Services to investigate families with transgender children. Although state courts have blocked the directive’s changing of the definition of child abuse, the Texas Supreme Court allowed the state to continue its investigations as legal challenges are ongoing, with families reporting their children being pulled out of class to be questioned by state authorities according to ongoing legal challenges.

While most of the nearly 240 anti-LGBTQ+ bills introduced in 2022 propose restrictions on the lives of transgender children in medical and educational settings, they are part of a growing wave of anti-LGBTQ+ legislation overall. Notable in this trend have been efforts to limit school employees from discussing gender identity, sexual orientation, and race – such as Florida’s recently passed “Don’t Say Gay” law – and to ban libraries from carrying books related to those topics. 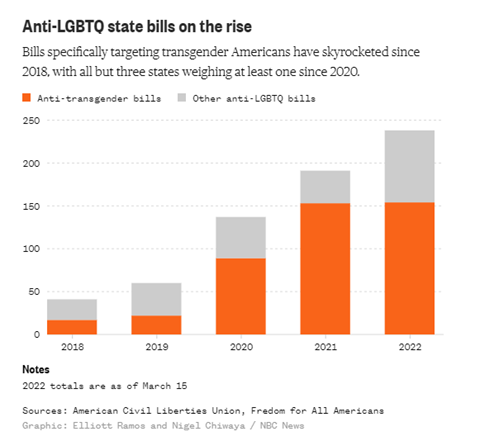 Efforts to Support Gender-Affirming Care: In response to these bans, at least eight states and the District of Columbia introduced legislation in 2022 to prevent discrimination against transgender people in health care or otherwise protect access to gender- affirming care.