Join ACP and thousands of your colleagues in Orlando, Florida, from April 10 - 12 and transform the way you practice medicine. Internal Medicine 2014 will allow you multiple opportunities to refresh your internal medicine knowledge, sharpen your practice management skills, network with colleagues from around the world in a beautiful location.

Education - Internal Medicine 2014 combines clinical skills workshops with over 200 scientific sessions to update your knowledge in all facets of internal medicine and the subspecialties. Learn all about the newest treatments, innovative technology, and disease management from top educators in the field.

Networking - A reception for international attendees, interactive learning sessions, and more make Internal Medicine 2014 an event with multiple opportunities to network with the best and brightest physicians from all over the world.

Discounts - Substantial registration discounts are available for international delegations (groups of 10 or more). The guidelines require that one person organize the group, provide the registration forms, and submit one payment by check or credit card for the entire group. Not all participants in group delegations are required to be ACP members, though an additional discount will be given to each full dues paying ACP member. Contact Pamela Carey at pcarey@acponline.org for more details.

Don't miss out on this wonderful learning opportunity. Visit im2014.acponline.org/for-meeting-attendees/international-attendees for more information. Hope to see you in Orlando!

A 66-year-old woman is evaluated for several months of a "whistling" or "swishing" sound in her right ear. She notes that it gets faster and louder when she exercises and thinks it is timed to her heartbeat. She does not notice any hearing loss, dizziness, or vertigo.

Which of the following is the most appropriate next step in the management of this patient?

A. Audiometry
B. Auscultation over the right ear, eye, and neck
C. Trial of a sound-masking device
D. Trial of a nasal corticosteroid spray

As of June 30, 2013, ACP has over 11,000 members outside of the United States. This represents a growth of 9% in international membership over the previous year. The most significant growth in the past year has been among the International Physician Affiliate class, Resident/Fellow members, and Medical Student members. International Physician Affiliate members, a category of membership introduced in 2012, more than doubled from 18 in 2012 to 39 in 2013. Three ACP chapters (Brazil, Chile, and Central America, each grew their full Member classes by over 34%.

The chart below shows ACP's international membership growth over the past six years. The College has consistently seen an increase in membership. ACP is grateful to all of our international members for their loyalty to the College and for making this growth possible. In recent years, ACP has also seen an increase in chapters outside the United States. In 2010, an ACP chapter was created in Saudi Arabia; in 2012, there was the addition of a chapter in Colombia; and, most recently, in 2013, ACP saw the creation of a new chapter in Southeast Asia. We expect to add new chapters in the future. 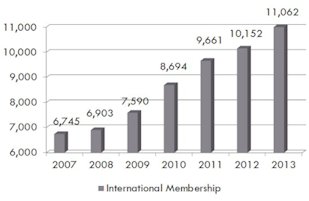 The Annual Meeting of the ACP Brazil Chapter was held in association with the Congresso Medico Universitario do ABC (COMU ABC) on August 14, 2013 in San Andre, Brazil. There were approximately 150 attendees at the meeting. Molly Cooke, MD, FACP, ACP President, served as the ACP Leadership Liaison to the meeting. 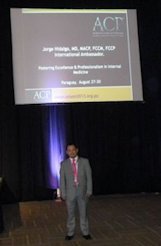 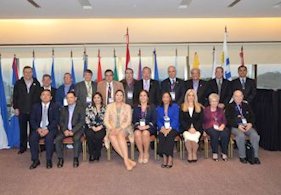 ACP is pleased to announce the following newly elected International Fellows, who were recommended by the Credentials Committee and approved for election by the Board of Regents as of September 1, 2013. They are listed by current location and may have been credentialed through a different Chapter.

Upcoming meetings will be held in Colombia, the Czech Republic, and Canada.

At this year's Internal Medicine Meeting, ACP presented seven John Tooker Evergreen Awards and four Special Recognition Awards to honor chapters that created new programs that strengthened the chapter and increased member communication and involvement. One of the chapters awarded Special Recognition was an International chapter. Here is a brief description of the International chapter's efforts.

Japan for English Version of Governor's Newsletter
The Japan Chapter feels that the new activities of its Public Relations Committee, specifically having the Governor's newsletter available in two languages, will promote information exchanges between Japanese and American ACP members and will also serve as a membership recruitment tool.

We celebrate all the chapters who submitted nominations, illustrating great programs and activities that actively engaged our members in advocacy, educational opportunities, and other College activities.

In 1993, the Evergreen Awards Program was started as a way to recognize outstanding chapter efforts and innovation. As a way to celebrate the 20th anniversary of the program, the Chapters Subcommittee and staff looked for a way to recognize chapters who have demonstrated a long-term engagement with the program. The criteria included that a chapter must have submitted at least 5 nominations, had at least 2 winners, and had a nominated program running for at least 3 years. Two international chapters, Japan and Venezuela, met these criteria. These chapters have contributed to the growth of all chapters through their commitment to sharing successful best practices through the Evergreen program and have been recognized as an Evergreen All-Star for their achievements.

Answer: B, Auscultation over the right ear, eye, and neck

Critique: Tinnitus that is timed with the patient's pulse (pulsatile tinnitus) is concerning for an intracranial vascular anomaly, such as stenosis, arteriovenous malformation, or glomus tumor, although patients with middle ear congestion may report a pulsatile sensation as part of their symptom complex. It is valuable to listen over the patient's ears, eyes, and neck, because if a vascular abnormality is present, the bruit causing tinnitus may sometimes be detected externally (objective tinnitus). If a bruit is present, or there is other significant concern for a vascular cause of tinnitus, imaging of the cranial vasculature (Doppler ultrasonography or magnetic resonance angiography) is the definitive study to rule out these diagnoses.

Audiometry would be appropriate if the patient had decreased auditory acuity, but this patient's physical examination findings do not suggest hearing loss.

External noise generators to mask the sound of tinnitus are helpful for some patients and may be reasonable to consider in this patient if no reversible cause is found. Evidence supporting their efficacy is sparse, however. The mainstay of therapy for tinnitus is neurocognitive interventions to help patients cope with the problem and diminish dysfunctional cognitive processes associated with the experience of tinnitus.

Nasal corticosteroid sprays can be helpful in patients with eustachian tube dysfunction, although this is an uncommon cause of tinnitus associated with conductive hearing loss. This patient does not demonstrate conductive hearing loss and has no evidence of middle ear congestion on examination. Thus, nasal corticosteroids are not indicated as the next step in management.

Key Point: Patients with pulsatile tinnitus should be evaluated for the possible presence of an intracranial vascular anomaly, such as stenosis, arteriovenous malformation, or glomus tumor as a cause of their symptoms.