Internal Medicine 2013, ACP's premier annual meeting, was held in San Francisco, California from April 11-13, 2013 and had an attendance of over 8,000 physicians. The event featured more than 260 workshops, lectures, panel discussions, and interactive courses for doctors of internal medicine and its subspecialties.

At the Convocation ceremony on April 11, approximately 500 physicians were inducted as ACP Fellows and recognized for their medical scholarship and achievement. Individuals and organizations were presented with nineteen awards in recognition of their contributions to the science and practice of medicine. Forty-seven Masterships were presented, and the College bestowed Honorary Fellowships to fifteen presidents of international internal medicine societies.

Following the ceremony, members, friends, and families gathered at the annual ACP International Reception that included over 300 international internal medicine leaders and attendees along with ACP leaders. During the reception, David L. Bronson, MD, MACP, ACP President, gave a few words to welcome everyone. International Fellowship Exchange Program (IFEP) awardees were also recognized and honored at this event.

ACP was honored to host presidents and representatives of internal medicine societies from around the world. The international delegates were part of the stage party in the Convocation ceremony. They also participated in ACP's 7th Annual International Forum, entitled "Global Healthcare Reform: Challenges, Triumphs, and Failures". The Forum provided an opportunity for ACP leaders and the presidents and special representatives from international internal medicine societies to discuss this important topic that crosses national boundaries and affects the health care of people around the world. 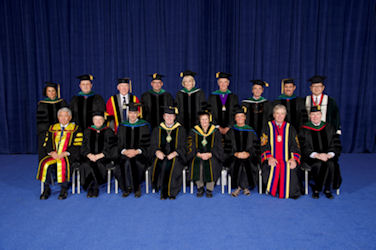 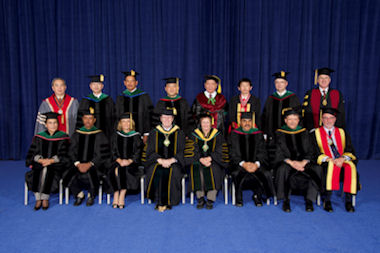 The following international physicians were awarded Mastership at Internal Medicine 2013.

Masters (MACP) comprise a small group of highly distinguished physicians who have achieved recognition in medicine by exhibiting a preeminence in practice or medical research, holding positions of high honor, or making significant contributions to medical science or the art of medicine. Mastership is considered a special class of membership. However, Masters are selected confidentially by the Awards Committee from among Fellows and are not self-nominated. More information regarding awards is available at http://www.acponline.org/awards. Nomination materials are due by July 1, 2013.

ACP's International Fellowship Exchange Program (IFEP) provides opportunities for early to mid-career physicians from outside the United States and Canada to gain expertise in a focused area relating to the prevention, diagnosis, and/or management of a clinical problem affecting women's health. Through observation, mentorship, and study of the work of senior faculty physicians, fellows will be funded to acquire knowledge, experience, and skills that they can apply, utilize, and disseminate to colleagues upon return to their home country. Faculty mentors will engage fellows in individual and group clinical and educational experiences and discussions, and facilitate the design of an independent project to be implemented in each fellow's own country upon his or her return. Fellowships are observational and expected to last four weeks. Candidates must be internists or subspecialists of internal medicine and must be ACP Members or Fellows. The program is funded by Merck. Information about the program may be found on ACP's website at: http://www.acponline.org/IFEP. 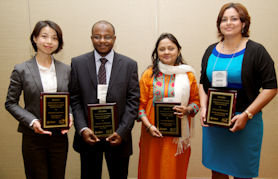 ACP Leaders on the Road: Bangladesh

I had the great fortune to represent the ACP as an Ambassador to the Bangladesh Society of Medicine. This meeting was the 13th annual Congress of the BSM. Professor Quazi Tarikul Islam chaired the meeting on behalf of the Society President, Professor H.A.M. Nazmul Ahasan.

Going to Bangladesh created great excitement because I knew so little about the country. I remembered that Bangladesh became a country in 1971 when the former East Pakistan rebelled against West Pakistan. I did not understand the national pride and reverence for the traditions and language of Bangladesh. The organizers arranged for me to see the Independence Monument and the Martyrs Monument dedicated to those students who died in 1952 fighting for the right to speak Bangla, their mother tongue.

The meeting was very exciting. Each day started with Grand Rounds. Grand Rounds consisted of 2 mystery patient presentations. I had the "honor" of participating in the expert panel trying to diagnosis the patient's problem. While I did not know the correct diagnoses, I loved the process and the learning involved from considering these presentations.

The Grand Rounds had great similarity to our own clinical problem solving sessions popularized at some medical schools and in several journals including NEJM, JGIM, JHM, and American Journal of Medical Sciences.

The remainder of the conference had talks and discussions of many relevant medical topics. The talks (all in English) highlighted the sophistication of the Bangladeshi physicians.

The highlight of the visit involved meeting many Bangladeshi internists. Internists half way around the world have the same concerns and dedication to our profession as any other member of ACP.

Bangladesh currently has greater than 60 ACP members and hopes to recruit enough members to create an ACP chapter in the next year or two. 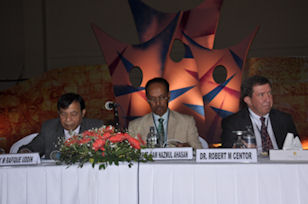 A 68-year-old man is evaluated for continuing urinary frequency and nocturia. His symptoms have been slowly progressive over the past 1 to 2 years with a weak urinary stream and hesitancy. He was started on doxazosin 6 months ago, which he tolerates well and initially provided some improvement. However, his symptoms have continued and are beginning to interfere with his quality of life, particularly the urinary frequency and nocturia. His only other medical problem is hypertension, for which he takes lisinopril and metoprolol.

On physical examination, he is afebrile, blood pressure is 140/85 mm Hg, pulse rate is 70/min, and respiration rate is 14/min. BMI is 25. He has a symmetric moderately enlarged prostate gland with no prostate nodules or areas of tenderness. A urinalysis is normal.

Which of the following is most appropriate next step in treatment of this patient's benign prostatic hyperplasia?

Upcoming meetings will be held in Chile, Uruguay, and Venezuela.

ACP's International Fellowship Exchange Program (IFEP) provides opportunities for early-mid career physicians from outside the United States and Canada to gain expertise in a focused area relating to the prevention, diagnosis, and/or management of a clinical problem affecting Women's Health. Up to three fellows will be funded annually to acquire knowledge, experience, and skills that they can apply, utilize, and disseminate to colleagues upon return to their home country. Fellowships are observational and expected to last four weeks.

Candidates must be internists or subspecialists of internal medicine and must be ACP Members or Fellows. For more information and to apply, please visit http://www.acponline.org/IFEP. The deadline to apply is August 1, 2013.

Check out ACP's new interactive member map feature. Click to discover how many members ACP has in different countries around the world, including yours!

This newly expanded forum provides ACP members with a place to engage in discussions, share ideas, and support one another professionally and personally. Participate by joining as many groups as you'd like, then connect with ACP members from all over the world with similar interests. Groups include Working Abroad, Women in Medicine, Emerging Technology, Clinical Problem-Solving, and many more. Join today!

Key Point: In patients with symptomatic benign prostatic hyperplasia, the combination of an α-blocker and a 5α-reductase inhibitor is associated with greater improvement in symptoms and more side effects than treatment with either agent alone.

This patient has classic findings of symptomatic benign prostatic hyperplasia (BPH), and combination therapy with both an α-blocker and a 5α-reductase inhibitor is indicated. The American Urological Association (AUA) guideline on treatment of BPH recommends that patients with an AUA symptom score greater than 7 (questionnaire available here) or who are bothered by their symptoms receive treatment for BPH. 5α-Reductase inhibitors (5-ARIs), such as finasteride and dutasteride, may be suitable in patients who have failed to respond to or do not tolerate α-antagonists and those with severe symptoms. The Medical Therapy of Prostate Symptoms Study demonstrated that in the long term, among men with larger prostates, combination therapy is superior to either α-blocker or 5-ARI therapy in preventing progression and improving symptoms. Similarly, the ComBAT trial demonstrated that combination therapy resulted in significantly greater improvements than single-agent therapy. Combination therapy was associated with a higher incidence of adverse effects than monotherapy.

5-ARIs decrease the production of dihydrotestosterone, thereby arresting prostatic hyperplasia. Because shrinkage is slow, symptoms often do not improve until after 6 months of therapy. Therefore, these agents are not typically used as initial monotherapy for BPH, and switching this patient from an α-antagonist to a 5-ARI would not be indicated. Side effects include erectile and ejaculatory dysfunction, reduced libido, gynecomastia, and breast tenderness.

α-Antagonists (terazosin, doxazosin, alfuzosin, tamsulosin, silodosin) relax the prostatic smooth muscle in the bladder outflow tract, act rapidly (usually within 48 hours), and are considered first-line treatment, producing a clinical response in 70% of men. All drugs in this class have similar efficacy and tend to improve symptoms by 30% to 40%. Although some agents are more selective for prostate-specific α-receptors and therefore have less effect on systemic blood pressure, there is not a significant difference in effectiveness in treating BPH. Therefore, there is no benefit in switching between α-antagonists in this patient, as he has tolerated his current treatment well. Abnormal ejaculation is a side effect and appears similar for all α-antagonists. Elderly patients are less likely to discontinue treatment because of ejaculatory dysfunction than because of cardiovascular side effects, such as postural hypotension, dizziness, and headaches.

A 4-week course of a fluoroquinolone antibiotic would be appropriate therapy for chronic bacterial prostatitis. However, this patient has no symptoms or signs of prostatitis on examination and a normal urinalysis, making this diagnosis unlikely.