ACP Leaders on the Road: Taiwan 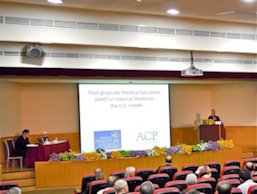 In November I had the opportunity to attend the 2013 Taiwan Society of Internal Medicine (TSIM) meeting in Taipei City, Taiwan. Taiwan is a vibrant, progressive country with exceptional public infrastructure (schools, parks, roads, public transportation, including very high speed rail) set on a beautiful island, which is the origin of its original Portuguese name, 'Formosa', meaning beautiful island.

The TSIM hosted a gala dinner on Saturday evening November 23 and I was fortunate to be seated with current and past TSIM leaders and my fellow guest, former ACP Japan chapter Governor Kiyoshi Kurokawa, MD, MACP. Professor Kurokawa recently led the Fukushima Nuclear Accident Independent Investigation Commission in Japan, which received extensive attention and commentary in the media worldwide. Not surprisingly, the discussion at dinner was delightful and wide-ranging, from health policy to education to nuclear energy.

On Sunday morning, Dr. Kurokawa and I presented lectures during a session that focused on global trends and challenges in health and the current status of internal medicine GME in the United States. In keeping with his designation by Foreign Policy magazine as one of the top 100 Global Thinkers, Dr. Kurokawa provided a thought provoking presentation on the major changes and threats facing the world and their implications for health and health care. I focused my presentation on the current structure and output of US internal medicine GME, highlighting a challenge we share with Taiwan, namely producing new primary care internists, while discussing the broader educational principles that define our current GME structure. This served as an excellent platform to highlight the ACP's recent statement on Dynamic Clinical Care Teams and to discuss changes driven by implementation of the NAS Next Accreditation System). A great large group discussion followed and attendees were particularly interested in discussing changes to US healthcare with implementation of the ACA and to GME with the NAS.

My wife Barbara and I also had the chance to explore Taipei and northern Taiwan. It is indeed a beautiful island and country that is thoroughly modern yet aware and respectful of its cultural heritage, including its architecture and arts. A particular highlight was the National Palace Museum, which is an internationally renowned-and massive- collection spanning the Song, Yuan, Ming and Qing Dynasties. The Ju Ming sculpture museum, with Ju Ming's monumental tai chi stone sculptures and panoramic views of the South China Sea was also a favorite.

I am deeply grateful to the TSIM for the opportunity to visit Taiwan and participate in the 2013 Taiwan Society of Internal Medicine meeting. I learned a great deal about healthcare in Taiwan and their system of UGME and GME. I want to extend special thanks to the TSIM President Pei-Ming Yang, MD, PhD, FACP and Ms. Lin, of the TSIM Secretariat for their generous and kind hospitality. 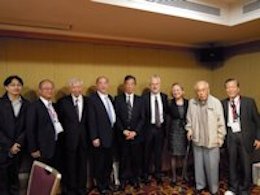 Register for IM 2014 by January 31 for Discounted Rates

Join ACP and thousands of your colleagues in Orlando, Florida, from April 10 - 12 and transform the way you practice medicine. Internal Medicine 2014 will allow you multiple opportunities to refresh your internal medicine knowledge, sharpen your practice management skills, network with colleagues from around the world in a beautiful location.

Education - Internal Medicine 2014 combines clinical skills workshops with over 200 scientific sessions to update your knowledge in all facets of internal medicine and the subspecialties. Learn all about the newest treatments, innovative technology, and disease management from top educators in the field.

Networking - A reception for international attendees, interactive learning sessions, and more make Internal Medicine 2014 an event with multiple opportunities to network with the best and brightest physicians from all over the world.

Discounts - Substantial registration discounts are available for international delegations (groups of 10 or more). The guidelines require that one person organize the group, provide the registration forms, and submit one payment by check or credit card for the entire group. Not all participants in group delegations are required to be ACP members, though an additional $35 dollar discount will be given to each full dues paying ACP member.

A 46-year-old man is evaluated for dull, aching, right groin pain. He says it has been present for the past 3 months. The pain was initially severe, improved for a few weeks, but slowly has been worsening since that time. He is now walking with a limp. He has no history of trauma. He drinks six beers a day and has done so for the past 25 years. He is a current smoker, with a 30-pack-year history.

Which of the following is the most likely diagnosis?

A. Hip osteoarthritis
B. L1 radiculopathy
C. Osteonecrosis of the hip
D. Septic arthritis of the hip

Save the Date: ACP's First National Conference in India - September 2014

The national conference will include a focus on non-communicable diseases, and update sessions on hypertension, diabetes, gastroenterology & hepatology, oncology, infectious disease, and cardiology. A one day pre-session in collaboration with Fortis Hospital is planned for September 4 and will focus on Gerontology issues.

More information will be announced in the coming weeks.

Alejandro Gonzalez, MD, FACP, was invited to serve as the ACP International Ambassador to this meeting by Miguel Angel Falasco, MD, FACP (Hon.), Congress President and Past President of the Buenos Aires Society of Internal Medicine. Dr. Gonzalez spoke on several topics related to nephrology. There was also an ACP exhibit booth at this meeting

Annual Meeting of the Mexican College of Internal Medicine
October 2-5, 2013

The Mexican College of Internal Medicine held its 36th National Meeting from November 13-16, 2013 in Villahermosa Mexico. There were over 2,000 attendees at the meeting. The ACP Mexico Chapter was well represented at the meeting and the Chapter Governor, Martin Herrera Cornejo, MD, FACP, was part of the stage party at the opening ceremony and gave scientific talks. There was an ACP exhibit booth at this meeting. 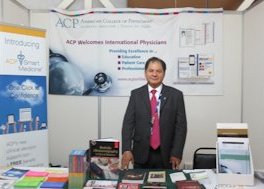 ACP is pleased to announce the following newly elected International Fellows, who were recommended by the Credentials Committee and approved for election by the Board of Regents as of January 1, 2014. They are listed by current location and may have been credentialed through a different Chapter.

Upcoming meetings will be held in Panama, Guatemala, and Bangladesh.

Tanveer Mir, MD, MACP, elected to serve as the Chair of the ACP Board of Regents in 2015

ACP extends congratulations to Tanveer Mir, MD, MACP, who has been elected to serve as the Chair of the ACP Board of Regents in 2015. Dr. Mir is a Master of the the ACP. She served as Governor of the ACP Downstate III Region (New York) and served as Chairperson of the International Medical Graduate subcommittee of the ACP New York Chapter. She received the Laureate Award from the ACP NY Chapter in 2001. She chaired the ACP Awards Committee from 2010 to 2012 and currently serves as Chair of the International Council. She is board certified in internal medicine, geriatrics and hospice and palliative medicine.

Currently, Dr. Mir is Associate Chief, Geriatrics and Palliative Medicine at the Long Island Jewish Medical Center. She is also a member of the medical faculty at Hofstra North Shore-LIJ School of Medicine at the Hofstra University in Hempstead, New York.

The College's Ethics Manual (Sixth Edition) is now available in Spanish. The ACP Ethics, Professionalism and Human Rights Committee and the Center for Ethics and Professionalism, which oversaw the translation, hope that the Spanish version of the Ethics Manual will increase its accessibility.

Both English and Spanish versions are available on the College's Web page at www.acponline.org/running_practice/ethics/manual/.

For more information, contact Kathy Wynkoop, Administrator for the Center for Ethics and Professionalism via e-mail at kwynkoop@acponline.org.

Answer: C, Osteonecrosis of the hip

Critique: This patient's presentation is most consistent with osteonecrosis of the hip. Osteonecrosis of the hip commonly presents with dull, aching groin pain (most commonly) or thigh or buttock pain that is indolent in onset. Occasionally, as is the case in this patient, severe pain may be reported in the early stages as bone death is occurring. Corticosteroid use and excessive use of alcohol account for more than 90% of hip osteonecrosis cases. On examination, patients have limited range of motion of the hip. During the early stages of this disease, radiographic imaging may be normal. Eventually, patchy areas of sclerosis and lucency may be seen. Hip MRI is the most sensitive imaging test for osteonecrosis and is typically positive early in the course of the disease.

L1 radiculopathy is rare. Symptoms include pain, paresthesia, and sensory loss in the groin. On examination, this patient has limited internal and external range of motion and pain with log-rolling of the hip. Each of these findings supports a joint etiology of this patient's hip pain and argues against lumbar disk disease at the L1 level.

Septic arthritis would be expected to present acutely with fever and limited range of motion. This patient's slow onset of symptoms and prolonged course are not consistent with septic arthritis.

Key Point: Osteonecrosis of the hip commonly presents with dull, aching groin pain that is indolent in onset; risk factors include corticosteroid use and excessive alcohol use.