ILLUSTRATION: Edema and pigment clumping are present in the macula. In the inferior temporal perimacular area, a large semi lunar retinal hemorrhage. There is also peripheral retinal pigment epithelial clumping. There is also moderate macular and perimacular edema. A fluorescein study would reveal the subretinal neovascular complex as the etiology of the hemorrhage and edema. Some cases may also show hard exudates (lipoprotein deposits). The view is slightly hazy because some of the hemorrhage has diffused into the vitreous. 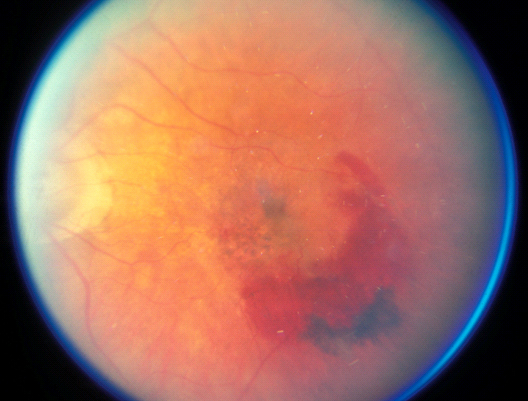 Standard treatment for wet ARMD has been with focal laser if the neovascular net can be identified early (Amsler Grid and fluorescine angiography) and is non foveal. More recently the anti-VegF compounds, Avastin and Lucentis, periodically injected into the vitreous have resulted in the regression of the neovascular complex with 35-40% visual improvement. Many clinical trials have been initiated to assess the best treatment timing and dosage.

While significant strides have been made in the treatment of the "wet" form, ARMD remains the #1 cause of blindness in the United States.