No more. Today, funding levels for the Texas General Internal Medicine Statewide Preceptorship Program are higher than ever, and the program is set to place more medical students than it did even in its glory days. 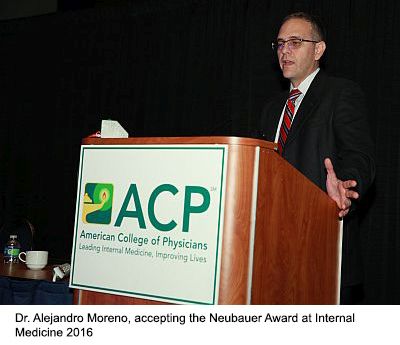 For his work to help rescue that program and other efforts to increase the primary care workforce, Moreno received the 2016 Richard Neubauer Advocate for Internal Medicine award during the American College of Physician's Leadership Day program in Washington, D.C., in May. Each year the award recognizes an ACP member who has made exceptional contributions to advance the College's public policy agenda.

"It took me completely by surprise," Moreno said of the honor.

Since 1992, the statewide preceptorship program in Texas has placed first- and second-year medical students with internists across the state for four-week mentorships during their summer break. The program included internists, family practitioners and pediatricians.

In Texas, as in other states, there's a dearth of primary care doctors, Moreno said, and "the preceptorship's goal is to get students interested in primary care specialties as early as possible."

When all monies for the program were cut eight years ago, the ACP's Texas chapter funded part of it, and Moreno stepped in, helping to educate members of Congress and their staff on why the primary care workforce and this program were so crucial.

"Eight years of hammering finally paid off, and paid off with a vengeance," Moreno said. "We now have $3 million in funding for the preceptorship. We now will ramp it up to even higher levels than what we had initially. The pediatric and family practice societies will also become involved again, and we hope to place even more medical students."

Though a noteworthy accomplishment in its own rite, it's not all that Moreno has done to further primary care.

"Dr. Moreno is knowledgeable, articulate, passionate, dedicated and tireless in his quest to expand the primary care workforce through multiple pathways," wrote Dr. Sue Bornstein, governor of the Texas Northern ACP chapter and executive director of the Texas Medical Home Initiative, wrote in nominating Moreno for the award. "His activities make him a valued role model for young physicians and medical students."

"Dr. Moreno is a quiet, thoughtful and effective leader who exemplifies the highest ideals of the ACP," Bornstein wrote.

Moreno regularly mentors internal medicine residents on the importance of advocacy by encouraging them to meet with their legislators and fight for change. He's been an eager participant in the College's Leadership Day meetings on Capitol Hill and has helped to lobby for the creation of a trust for graduate medical education funding that protects these monies from any changes in the economy. He also campaigned for human rights as a human rights consultant for Physicians for Human Rights and as a member of ACP's Ethics, Professionalism and Human Rights Committee for seven years. He's also president of the Texas Services ACP chapter and member of the Texas ACP Health and Public Policy Committee.

"I got to know him when we both served on the national Ethics, Professionalism and Human Rights Committee," Moreno said. "I know how passionate he was and how much he advocated for primary care."