Born into slavery in Philadelphia on May 2, 1762, James Derham became our nation’s first African American physician.  Enslaved by three physicians, Derham learned to practice medicine, bought his own freedom, and established his own medical practice in New Orleans, defying the racism and injustice of the times.  Derham was first enslaved by John Kearsley Jr., a Philadelphia physician who was considered an expert on throat diseases. Derham learned to read and write as a child and was later trained by Kearsley to compound medicines and wait on patients.   After Kearsley's death, Derham was enslaved by Dr. George West, a British physician, who had Derham assist him in performing basic medical tasks. At the end of the Revolutionary War, West left Philadelphia to return to England, and Derham was then enslaved by New Orleans physician Dr. Robert Dove. Dove encouraged Derham to practice medicine and trained him to be a medical assistant and apothecarist. Derham purchased his freedom by working as Dove's assistant for four years. Derham freed himself in 1783 at the age of twenty-one and started his medical practice in New Orleans.

In colonial times, most medical practitioners learned their skills as apprentices of established doctors, so Derham’s medical training was like most medical practitioners.  (Of the approximately 3500 doctors in the United States in 1800, only about ten percent had been professionally trained in a medical school.) New Orleans, a French territory at the time, was not as openly racist as American cities of the same period. As a result, Derham treated both Black and white patients. In just five years, He had become one of the most popular and distinguished doctors in New Orleans, and was particularly admired for his knowledge of English, French, and Spanish.

In 1788, Derham met with prominent physician Dr. Benjamin Rush, the man often called the "father of American psychiatry." Rush had heard of Derham's reputation for successfully treating diphtheria patients in New Orleans. Apart from his medical interest, abolitionist Rush may have been interested in interviewing Derham, as a means of challenging racist stereotypes. At the time, Derham was eager to return to Philadelphia to be formally baptized in the Episcopal church he attended as a child. With Rush's encouragement, Derham returned to Philadelphia, where he became renowned as an expert in throat disorders as well as the relationship between climate and disease. Rush was so impressed with Derham that he read his paper on the treatment of diphtheria before the College of Physicians of Philadelphia.

Derham returned to New Orleans in 1789. During the yellow fever epidemic of the late 18th   Century that raged through New Orleans, he managed to save the lives of 80% of his patients who had contracted the disease. His career progressed without much interruption until 1801, when city commissioners in New Orleans decided to limit the activities of individuals practicing medicine without medical degrees. Derham was restricted to serving as an assistant to degreed physicians. Derham was disconcerted about the restriction, and in his May 20th, 1801 correspondence to Rush, indicated that he would like to return to Philadelphia if his opportunity for earning a living would improve.

Here the mystery of Dr. James Derham begins. His letter to Benjamin Rush, dated April 5, 1802, is the last historical trace of this medical pioneer. Some think that Dr. Derham did in fact return to Philadelphia to open a medical practice; others speculate that he may have died of yellow fever or perhaps moved to some other place to continue treating patients. In any event, his fate and eventual death are unknown. Despite this mystery, the story of Dr. James Derham is a remarkable testament to the human spirit. Throughout his life, Dr. James Derham defied both cultural expectations and systemic racism to become a doctor in an age when such events were nearly unattainable. 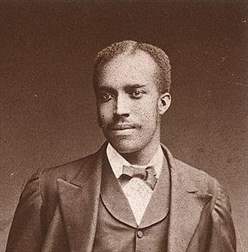 A generation or two later, Nathan Francis Mossell continued the quest for equal rights by becoming the first African American to graduate from the University of Pennsylvania’s Medical School.

Mossell was born in Hamilton, Ontario, Canada on July 27, 1856, to free Black parents.  Married in Baltimore, Mossell’s parents moved to Canada in 1853, their three children in tow, seeking a less discriminatory environment and greater educational opportunities for themselves and their children.

During the Civil War, the Mossell family, now including six children, resettled in upstate New York. In 1879, Nathan graduated from Lincoln University, a historical Black college outside of Philadelphia and then entered the Medical School of the University of Pennsylvania.  He graduated in 1882, becoming the first African American to graduate from Penn’s Medical School.

After graduation, Dr. Mossell was trained first by prominent surgeon Dr. D. Hayes Agnew in the outpatient surgical clinic of the University Hospital. Systemic racism made it difficult for Black students to secure internships in the United States, so, Mossell traveled to England to complete an internship at the Guy's, Queens College and St. Thomas hospitals in London.  In 1888, after his return to Philadelphia, Mossell opened an office at 924 Lombard Street and surmounted significant racist opposition to become the first African American physician to obtain membership in the Philadelphia County Medical Society.

Not content with these accomplishments, Dr. Mossell founded The Frederick Douglass Memorial Hospital and Training School, which was only the second Black hospital in the United States at the time.  The Hospital, a Black-owned and operated 15-bed facility at 1512 Lombard Street, offered healthcare services to the African American community in Philadelphia; it also trained Black nurses and provided internships for Black physicians. In 1909, the hospital purchased a new building with 75 beds at 1534 Lombard Street.

In addition to his medical achievements, Mossell also played a leading role in civil rights and political action. He was one of the first to pressure for the hiring of Black professors at his alma mater Lincoln University. In 1900, Dr. Mossell co-founded the Philadelphia Academy of Medicine and Allied Sciences, an association for African-Americans in medicine; was a founder and director of the Philadelphia branch of the National Association for the Advancement of Colored People in 1910; and was a member of the Niagara Movement organized by W.E.B. DuBois in 1905. He spent decades advocating for the integration of Girard College. Mossell also worked with state representative Arthur Faucett, to pass a bill banning exclusion of Black students from university housing at Penn.

Nathan Mossell, his wife Gertrude and their two daughters, Mary, and Florence Alma, lived at 1432 Lombard Street in Philadelphia. Gertrude Bustill Mossell worked as a professional writer and editor, publishing several books, and working for such Philadelphia papers as the Press, Times, and Inquirer. She also became active in civic causes, especially fund raising for Douglas Hospital and the establishment of the Southwest branch of the YWCA.

Both Nathan and Gertrude Mossell were part of remarkable extended families. Her great-grandfather had been a baker for George Washington's army and her sister became the mother of singer and actor Paul Robeson. Nathan’s younger brother Aaron Albert Mossell was the first African American to graduate from Penn’s Law School in 1888; Nathan's niece, Sadie Tanner Mossell Alexander earned her Ph.D. from Penn in 1921, she became the first Black woman to obtain a Ph.D. in the United States. She was also the first African American woman to graduate from Penn's Law School and the first to be admitted to the Pennsylvania Bar.

Mossell served as Frederick Douglass Memorial Hospital's chief-of-staff and medical director for 35 years, retiring in 1933. He continued to work in his private practice until shortly before his death at age 90, on October 27, 1946.  Two years after his death, Frederick Douglass Memorial Hospital merged with Mercy Hospital, to create Mercy Douglass Hospital which continued to serve Philadelphia until its closure in 1973.   At the time of his death, Nathan Francis Mossell is believed to have been our nation’s oldest practicing Black physician.