The first weekend in June brought together members of the Wyoming Chapter of the American College of Physicians during the Wyoming Medical Society's Annual Meeting at Jackson Lake Lodge in Grand Teton National Park. 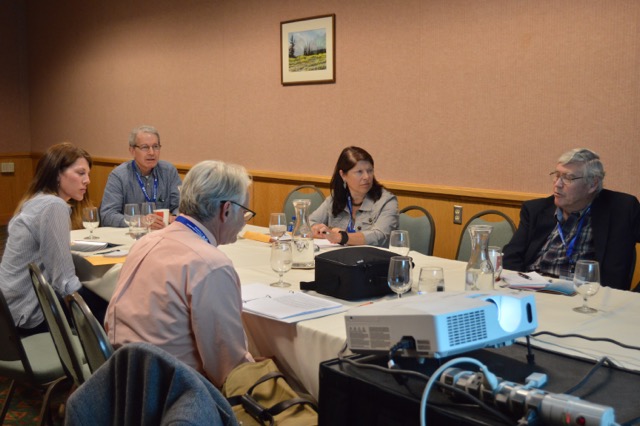 The Wyoming Chapter of the ACP sponsored three events over the weekend – a Governor's Advisory Committee Meeting, a SEP module and an ACP Town Hall – before breaking on Sunday, June 4. 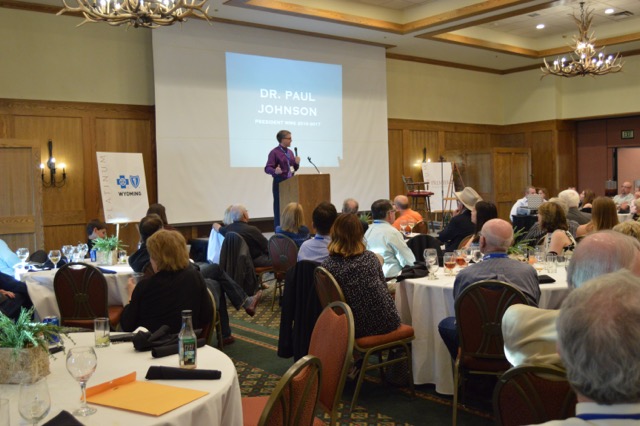 Dr. Mike Tracy, the state’s incoming ACP Chapter Governor speaks at the WMS Annual Meeting at Jackson Lake Lodge on June 3. Tracy was honored as the State’s Physician of the Year by the WMS.

Tracy still has the opportunity to fill out his advisory council, but spent some time kicking around ideas with a number of ACP participants, including out-going chapter Governor James Bush, MD, FACP. The Wyoming Chapter of the ACP has come back from the brink of financial concerns and has accumulated enough cash to consider more out-reach and projects. The Wyoming ACP chapter budgets $12,856 in revenue for the year, against $11,875 in expenses.

A number of ideas were floated around during the Governor's Advisory Council Board meeting for new and different activities. Among them were the possibility of a standalone one-day meeting for Wyoming ACP members; clinical events; and other efforts to tap into the hospitalist community for increased memberships.

To take part in the Governor's Advisory Council, contact Tracy at: drtracy@307health.org

Saturday the ACP Town Hall Meeting with five ACP Wyoming Chapter members present. The conversation centered around the national movement to pay internists on an RVU scale and the impacts to rural physicians in Wyoming. The question of what Wyoming ACP members can do to help its hospitalists understand what is important in negotiating contracts was also discussed.

Dr. Tracy and Dr. Bush and spent time laying out their trip to Washington, DC for the Internal Medicine 2016 Meeting, as well as its trips to meet the state's congressional delegation for Leadership Day. Dr. Bush said the trip to Washington was especially important in the light of recent changes to MACRA from the SGR model.

Robert Stuart, MD offered the Treasurer's Report showing an adjusted cash balance of $12,972.31. That is up from $12,699.24 from last year at this time. The budget was approved.

Dr. Tracy suggests visiting internists in Jackson, Cody, Cheyenne, Sheridan, as well as WWAMI students over the next year in the name of recruitment to the Wyoming Chapter.

“We learned that it's so expensive to live in Jackson that housing is subsidized for hospital employed physicians,” Tracy said in amazement. “We had hospital-employed physicians, private practice physicians, a government employed physician. We all share a common bond in our desire to provide excellent care to our patients. There is interest in the group to increase interaction amongst internists in the state.”

Wyoming Chapter of the ACP Stats (from ACP) 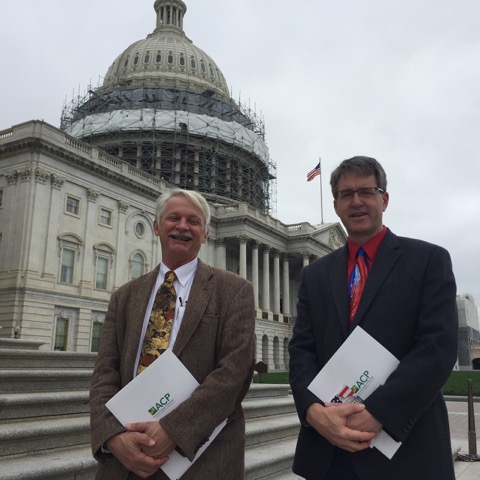 Wyoming’s out-going and incoming chapter Governors stand on the steps of the US Capitol in May. Dr. James Bush (left) and Dr. Mike Tracy attended the ACP’s IM2016 Meeting followed by Leadership Day in which the two visited Wyoming’s congressional delegation.

Three members of the Wyoming Chapter of the ACP made their way to Washington, DC in May to take part in the 2016 Internal Medicine Meeting and subsequent Leadership Day. Out-going ACP Governor James Bush, MD attended the meeting, as did the incoming Wyoming Chapter ACP Governor Mike Tracy, MD.

In addition to Bush and Tracy, Wyoming Chapter ACP Director Tom Lacock took in an IM Staff Development Day and presented at the meeting on communications efforts of the Wyoming Medical Society. Lacock was one of seven presenters at the May 5 meeting, with others presentations covering residency recruitment, mentoring, as well as the value propositions of joining membership organizations. 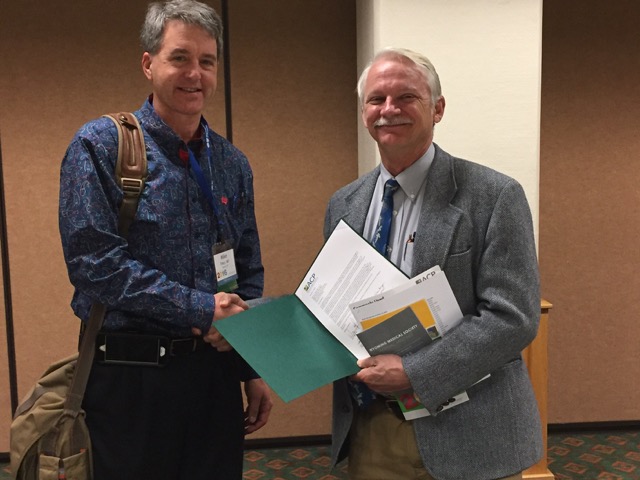 ACP Chapter Governor Mike Tracy, MD, FACP was honored as the State's Physician of the Year, according to the Wyoming Medical Society. The WMS Physician of the Year awards an outstanding Wyoming doctor from nominations submitted by colleagues, hospitals, healthcare professionals, and friends who believe in a physician who stands out from the crowd whether it be through medical innovation and clinical decision-making, or leadership within their communities.