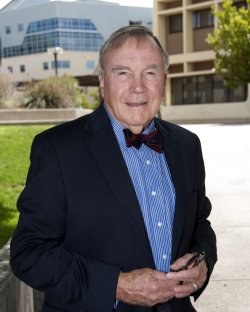 The New Mexico Chapter of the American College of Physicians is honored to recognize Robert (Reg) Strickland, MD, MACP for the Chapter Centennial Legacy Award.

Dr. Strickland has a 40-year record of service and leadership in ACP, and has been the New Mexico Chapter Scientific Program Chair, the Chapter President, and was Governor from 2003-2007. He became a Fellow in 1977, received the Laureate Award in 2000, and was awarded Mastership in 2009. During his time as Governor, the chapter received 10 national ACP awards, four Chapter Excellence Awards, and two Evergreen Awards, His leadership greatly enhanced the interaction between the chapter and the University of New Mexico's Department of Internal Medicine's faculty, residents, and students, and at one time in his tenure, all senior faculty in the department were ACP Fellows.