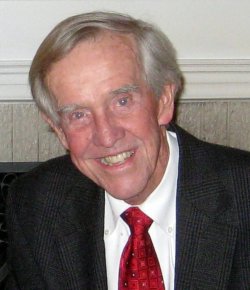 The Washington, D.C. Chapter of the American College of Physicians is pleased to nominate Richard B. Perry, MD, MACP for the Chapter Centennial Legacy Award.

In addition to his career as a practicing physician, he has contributed to medical education at the Georgetown University. He was promoted to Clinical Professor of Medicine in 1990. He received the Master Clinician Award from Georgetown University for clinical teaching in 2000.

Dr. Perry has generously devoted his time and expertise to provide medical care for underserved populations in the United States, as well as in Haiti. He was a founding member of a Mercy Health Clinic which was recognized by the College for the Edward R. Loveland Memorial Award in 2004. Dr. Perry was the leader of a medical mission to provide patient care and teaching at Sacre-Coeur Hospital in Haiti.

In recognition of Dr. Perry's long career as a caring, compassionate physician, as an educator and role model and as a leader in providing care to underserved communities, we strongly recommend him for the Chapter Centennial Legacy Award.