B. A. Muruganathan, MD, FACP 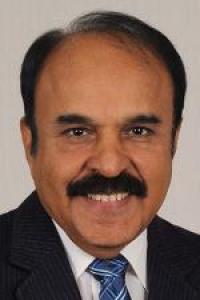 Post-Doctoral Training:6 Months as a Special Trainee in Intensive Medical Care at Government General Hospital at Chennai (Apr 1978 to Sep 1978)

ACP Chapter Activities/Leadership Activities: Governing Council member of the ACP India chapter till date. Finance Committee member. Helped in organizing and fund raising for “1st ACP India Chapter Congress – Medicine 2016” held at Mumbai. Delivered a talk on “Dengue, Malaria and H1N1: When to get concerned and Challenges in Management” in the above conference. Motivated many delegates and API members to join ACP.

ACP National Activities: Fellow since 2012. Participated as a dignitary on the dais in the convocation ceremony held in April 2013 as an invited guest of the ACP President. Met the President, Prof. Bronson, Vice President Mr. Ott, and Regents Drs. Kutty and Mir. After the conference, visited ACP Headquarters in Philadelphia to discuss ACP India chapter formation and initiated the discussion on starting the ACP India chapter. Proposed around 25 senior physicians for ACP Fellowship.